What is the Andrew James Ice Cream Maker?

What’s better than a machine that can churn out delicious ice cream? One with not just a single bowl, but two – for double the amount of tasty treats.

Perfect for making multiple flavours for families with fussy eaters, health fans or those on a restricted diet, the extra bowl also means you can always have one in the freezer for frozen desserts in 20-30 minutes.

As well as being compact enough to store in a cupboard, the Andrew James Ice Cream Maker’s bowls take up minimal room in the freezer, with a height of 15cm and a diameter of 17.8cm. The machines is available in white or light blue. 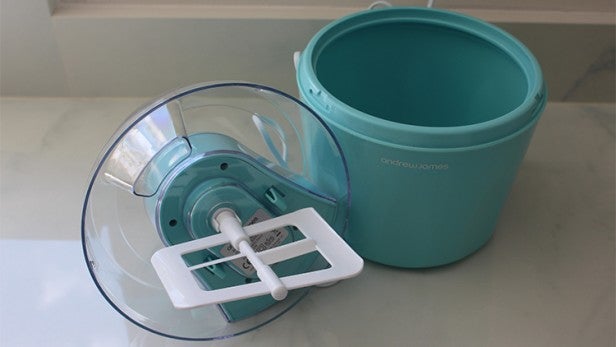 The design of the Andrew James Ice Cream Maker is best described as fuss-free. Not only does this make it easy to keep clean, it also means the machine is straightforward to assemble and use. 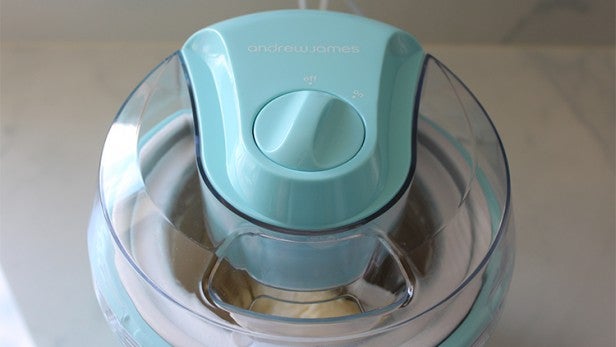 There’s a single dial for switching the machine on and off, with a wide funnel in the lid for pouring in the liquid mixture and adding extra ingredients as it churns. Aside from where the power unit sits, the lid is clear so you can keep an eye on progress. Once you’re done, all the parts that come into contact with the mixture can be cleaned by hand and the detachable power unit means there’s no need to be extra careful about splashing any parts that plug in.

Andrew James Ice Cream Maker – What is it like to use? 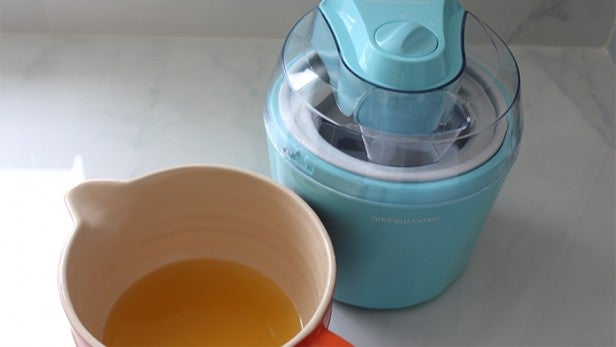 If you’ve previously written off making your own ice cream as being too difficult, this Ice Cream Maker and its super-simple instructions are sure to lure you back. There are a few recipes to get you started, ranging from classic vanilla ice cream to frozen yogurt, with a few requiring pre-prep and some as easy as combining ingredients and pouring the mixture straight in.

The inner bowl required only a minimum of eight hours’ freezing time in advance, making it good for popping in the freezer the night before or early in the morning with the promise of a sunny day ahead. The bowl isn’t too big so fitted neatly into a freezer drawer. 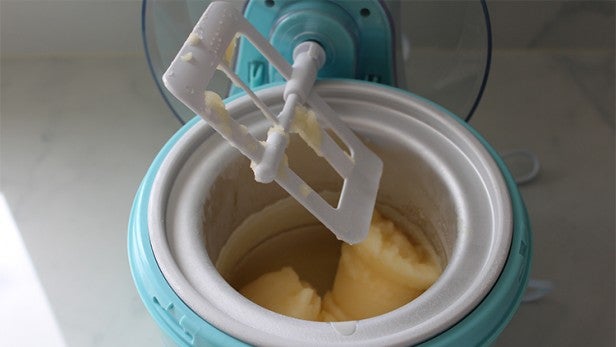 I started with the recipe for banana ice cream. Mixing together banana, milk, cream and sugar, I set the machine running and slowly poured in the liquid. Having a spout to aim for made pouring easier, while the lid minimised splashback from the rotating paddle. Even so, a small amount of the mixture did splash out, but most made it into the bowl.

The machine was a little noisy in operation – while it wasn’t loud (it generates around 65dB, which is between the level of normal conversation and laughter), the sound itself was noticeable. 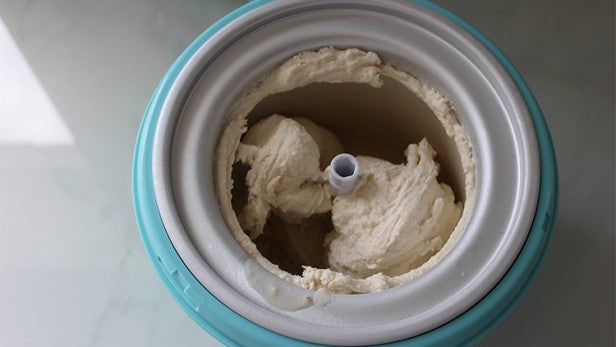 Removing it from the bowl was straightforward, except around the base and sides, where the ice cream was frozen harder. This had to be scrapped off with a spatula. It developed well in the freezer but remained soft enough to scoop out. Another useful feature was that the paddle has some tolerance where it joined to the power unit, so there was no need to worry about the ice cream becoming too firm. 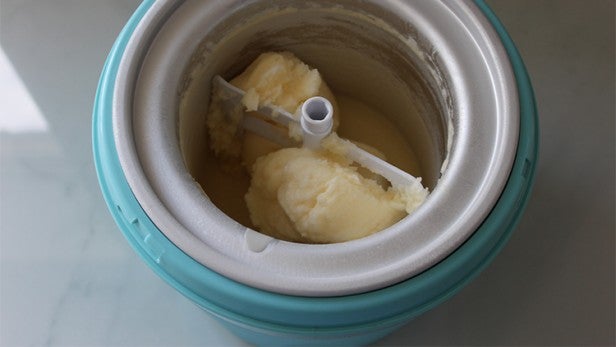 Next, I made lemon sorbet using the second bowl. This required some pre-prep: making a sugar syrup before adding fruit juice and whisking up an egg white. Since this resulted in a thinner liquid, pouring it into the running machine was splash-free.

After 15 minutes, the mixture was slushy and partially frozen. I continued to run the machine until it had been churning for 30 minutes. After this time the sorbet was much firmer and smooth, but still soft enough to remove from the bowl in clumps, including from the sides and base. It froze well in the freezer, free of any ice crystals.

All the parts except the inner bowls could be cleaned by hand straight away, with no crevices for ingredients to gather. The inner bowls needed to defrost before cleaning.

Should I buy the Andrew James Ice Cream Maker? 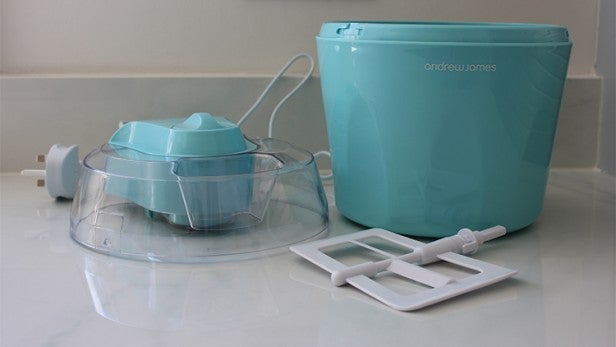 The perfect example of a small appliance that really delivers yet costs as little as six or seven tubs of premium ice cream, this Ice Cream Maker is far more than a fair-weather kitchen friend.

Low maintenance, compact and easy to use, it’s guaranteed to earn its place on almost any worktop throughout summer and beyond. Sure, it could be improved by adding a timer and dishwasher-safe parts, plus its plastic outer won’t appeal to everyone, but this is far outweighed by how much fun you’ll have experimenting.

Great for beginners as well as keen cooks – get ready to churn out endless fantastic flavours all summer long.