What is the Bosch MUM59340GB Kitchen Machine Stand Mixer?

Part stand mixer, part multi-functional kitchen machine – if the Transformers did small appliances, they would look like this.

Equipped with a three-zone moveable arm and seven speeds, the list of what the Kitchen Machine can do is a long one. In its stand mixer role it beats, mixes, whisks and kneads, while a continuous feed shredder covers five types of chopping, slicing and shredding both finely and coarsely, and grating. A citrus press attachment turns the KItchen Machine into a juicer, plus there’s a mincing attachment for meat and a blender.

In short, the majority of your food prep is covered by this one machine, and there’s even a storage bag for the tools. Wow.

More compact than the average stand mixer, the Kitchen Machine’s curves are no less sinuous but its design details extend beyond good looks.

While many have one attachment outlet on the front, the Kitchen Machine has three that can drive its attachments: one on top; one at the back, which becomes usable when the arm drops down; and the tool socket itself when dropped down. The arm is moved between positions by pressing a release button on top, while the seven speeds plus pulse are controlled by a dial on the side. 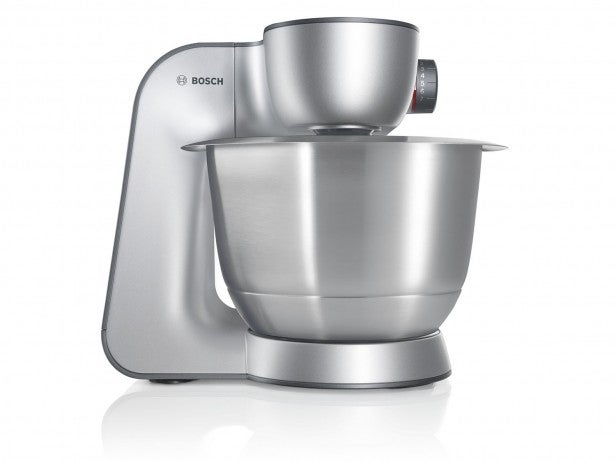 While it offers plenty of features, its primary role as a stand mixer hasn’t been overlooked. Each tool – beating whisk, kneading hook with dough deflector, flexi-stirring whisk – slots in at an angle, allowing it to mix with a planetary motion around the tall bowl. The bowl itself has enough capacity for up to 2kg of dough, and includes a plastic splashguard that slides into place. Other notable features include a cord that rewinds automatically, and overheating protection.

Bosch MUM59340GB Kitchen Machine Stand Mixer – What is it like to use?

There’s quite a bit of kit with the Kitchen Machine, so figuring out where everything goes can be overwhelming at first. However, I was soon up and running, and started by making a sweet dough for cinnamon buns.

Placing butter and flour into the bowl, I fitted the flexi-stirring whisk – I felt this tool would be better at rubbing the fat into the flour. Setting it on the minimum speed with the splashguard in place, I moved up to speed 3 once the larger lumps of butter weren’t visible. The sweeping and rotating motion of the blade was effective, and soon the mixture began to resemble breadcrumbs.

Switching to the hook, which has a handy guard fitting at the top to keep dough out of the outlet, I added warm milk and sugar, and used speed 1 to combine it before moving up to speed 3 to knead. The dough wrapped itself around the hook but could easily be removed. After five minutes, it was pliable and doubled in size when left to rise. The finished buns were light and fluffy.

Next, I tried a modified version of one of the supplied recipes for chocolate fondant. Placing egg yolks and sugar into the bowl, I used the whisk on level 7 for three minutes until the mixture was foamy. Adding butter and chocolate, I reduced the speed to 3. The tool always returned to the back of the bowl, so it wasn’t in the way when I was adding ingredients. This was puzzling at first, when the mixer had been stopped but the tool continued moving.

Placing egg whites and sugar into the bowl, I used the whisk again on level 7 for six minutes to whip them to a glossy consistency, until the mixture was so firm that it gathered within the body of the tool. I then folded it into the chocolate mixture. The fondant lost some volume in this second stage, but once baked it was crisp on top and soft in the middle.

Moving onto the citrus press, I used it to juice three halved oranges on speed 3 – although it can go up to 5 if required. Holding the halves on the reamer is tricky at speed, but it produces a good quantity of juice quickly, with just a few small seeds making it through the fine sieve.

Next, I used the mincer to process beef. For this, you have to remove the bowl, drop down the arm and fit the attachment into the tool socket, which means you have to turn the machine around. This makes using the control dial difficult as the speeds aren’t visible. However, the meat was simple to process, with only fat wrapping around the mincer’s screw. The mincer disassembles, so is easy to clean. 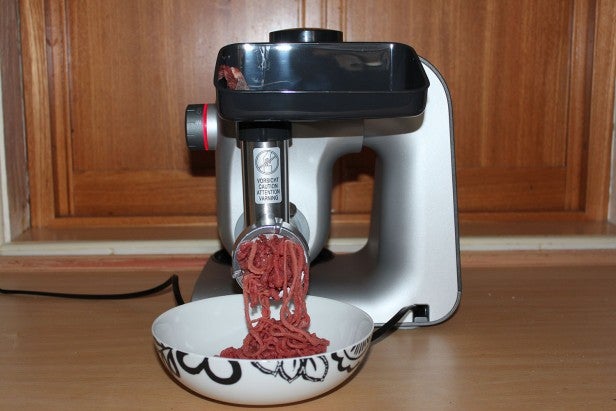 Reverting the Kitchen Machine to its standard position and replacing the bowl, I attached the shredder and used it on speed 5 to slice leeks and carrots with the coarse side of the slicing disc. The feed chute is wide, so I found it easier to slice two vegetables at once. The slices were consistent and prepping this way was a real time-saver. 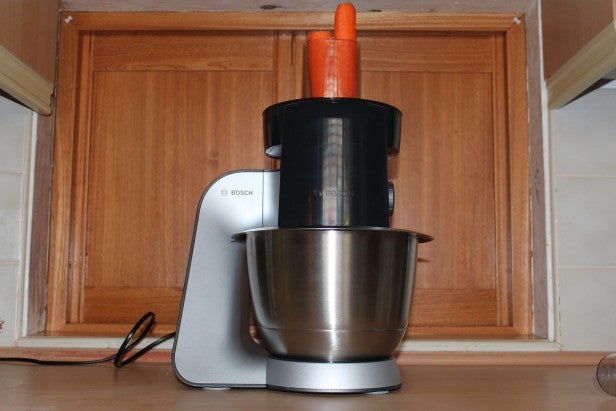 I finished by using the vegetables to make soup. Once cooked, I added half to the blender. The lid clips into place, plus the funnel in its centre works well for adding liquids, or allowing steam to be released. While some blender attachments can lack power, this worked its way through the vegetables on speed 5 for a thick, lump-free texture. All the parts are dishwasher-safe, apart from the mincer. 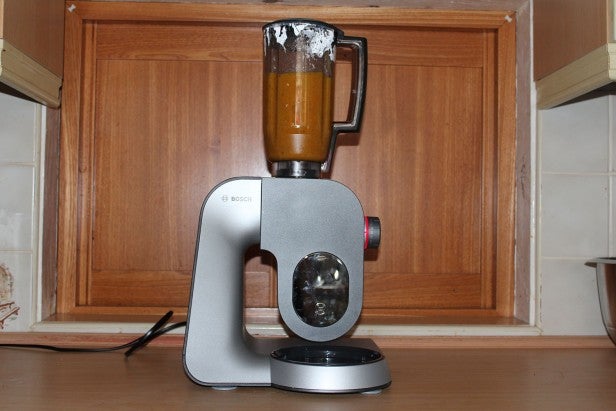 Should I buy the Bosch MUM59340GB Kitchen Machine Stand Mixer?

An ideal first appliance, wedding present or solution for a small space, the Kitchen Machine is a hard worker. As well as multiple functions and storage for its blades and tools, its price point makes it great value when you consider everything it can do compared with other stand mixers. If you already have a good set of small appliances there is little point doubling up, but otherwise there’s a lot to like about this versatile, powerful mixer.

Think you’d be a keen baker or cook – if only there was less prep? Then this multi-tasking machine is the answer.