What is the Braun MQ3126 MultiQuick Spice?

One of the most common tasks that hand blenders often can’t be used for is grinding hard food, such as coffee, spices and peppercorns. This is because they blunt blades, and they’re likely to scratch and discolour containers over time. However, the Braun MQ3126 MultiQuick Spice hand blender comes equipped with a clever metal grinding mill to take care of them for you.

This means that it will cure your curry pangs, caffeine cravings and seasoning needs, and it’ll also handle a host of other blending tasks, from blitzing soups, smoothies and dips, to whisking and chopping.

From a design perspective, functionality is everything with the MultiQuick Spice, from its ergonomic handle, complete with an area of small bumps for grip, to two trigger buttons that are easily within reach of a thumb. One of these is the Turbo, which supplies maximum power at a single press (and can also function as pulse), and the other is for variable speed. There are 11 speeds to choose from, controlled by a dial that’s located on top so that it won’t get knocked by accident. 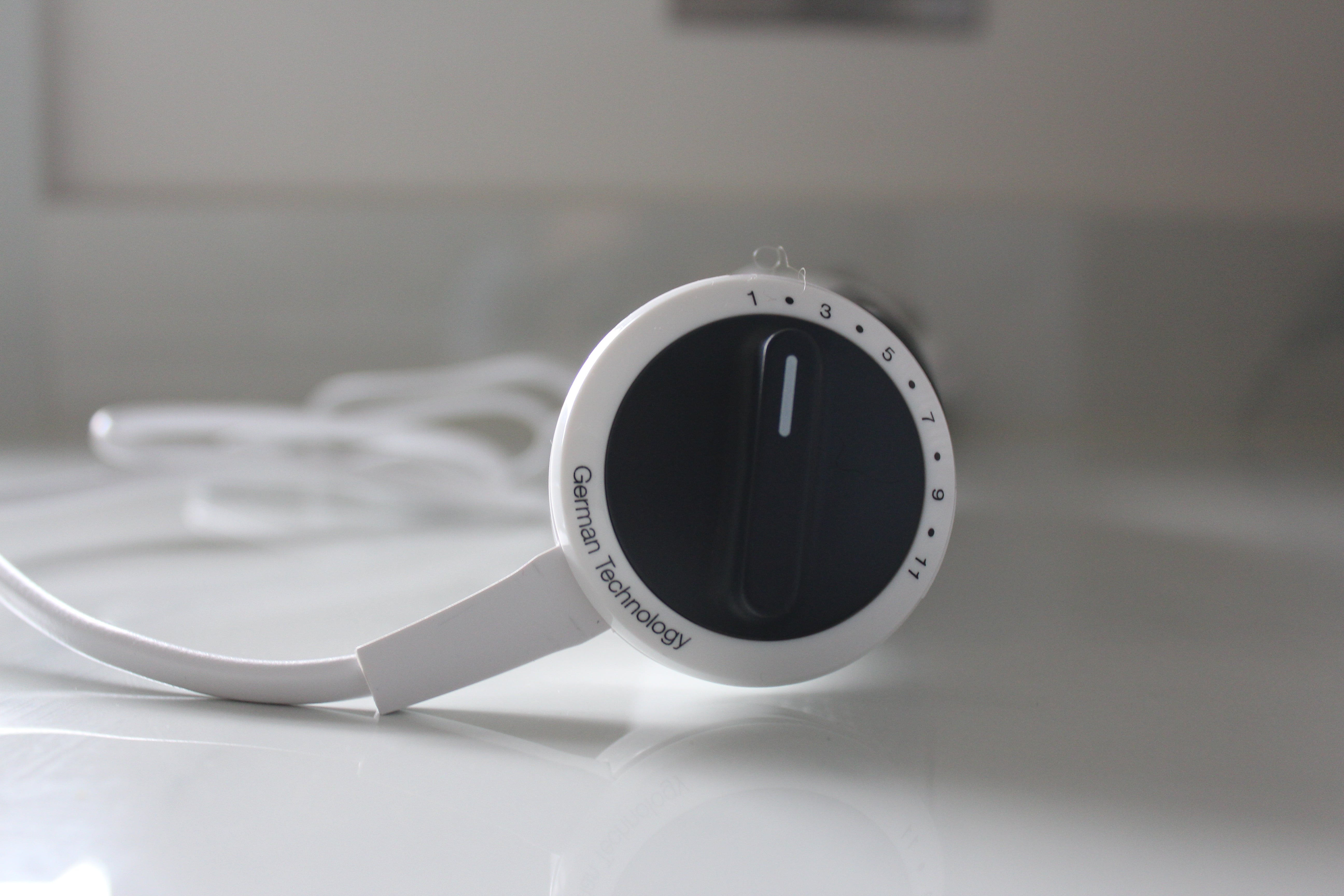 Rather than just the standard leg, there are four accessories: a whisk with a gearbox, the mini chopper, the grinding mill (both with a non-slip base) and the blending shaft. Each clicks on easily with two push buttons at the side of the motor unit to release it. The design of the blending shaft is especially thoughtful, with a fluted bell-shaped base that helps prevent splashes and lessens the suction that can be a hand blender issue. There’s also a long cable that enables the blender to be used almost anywhere in a kitchen.

Braun MQ3126 MultiQuick Spice – What’s it like to use?

The first thing you’ll notice about the MultiQuick Spice is how comfortable it is to grip – it’s not too heavy to hold for longer tasks, nor it is awkward to manoeuvre around a pan or a bowl. For most jobs, you can use it with just one hand, the exception being if you want to move up or down through the speeds by turning the dial. 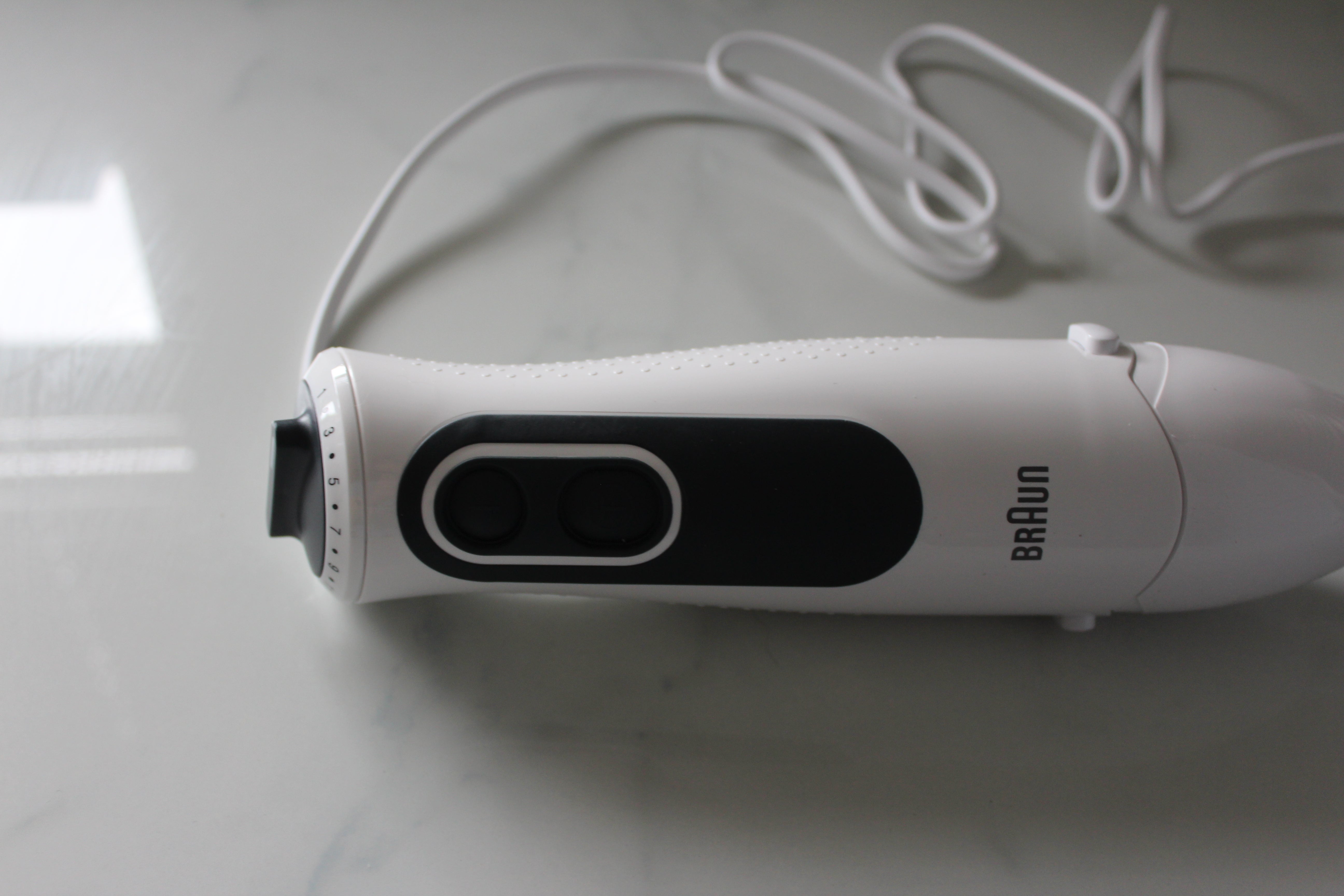 Most smaller tasks can be done using the blender shaft and the included 600ml beaker, which is a good size for making mayonnaise, salad dressing or baby food. I started by using it to process a fruit-based smoothie, which included leafy greens, avocado and pear. The Turbo speed was recommended. During blending, the leg pulled towards the bottom of the beaker slightly, but I could keep it from suctioning onto the base and held the blender in the middle of the mixture instead. What was impressive was how little it splashed, only producing small flecks when it was near the top of the smoothie. 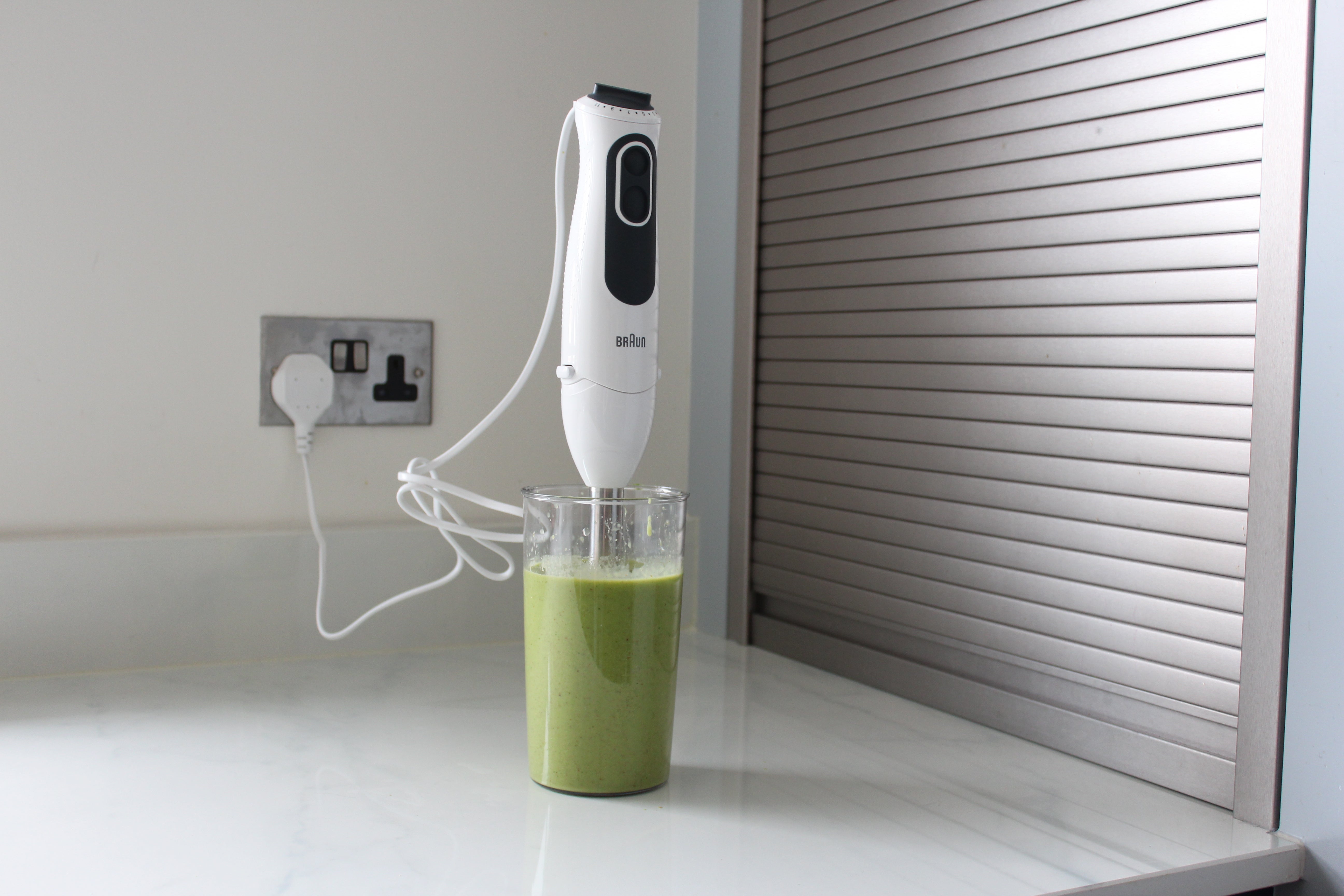 The resulting drink was well-blended in around 30 seconds, with some texture remaining from the pear but no lumps. Next I tried the spice grinder. This helpfully has a clear plastic lid that drops into place letting you peer through, keeping an eye on progress. I used it to grind peppercorns with the highest speed as recommended, which was again Turbo, for a fine result. While the maximum run time was 20 seconds, it didn’t take that long to reduce the peppercorns to a fine grind with no large pieces remaining. 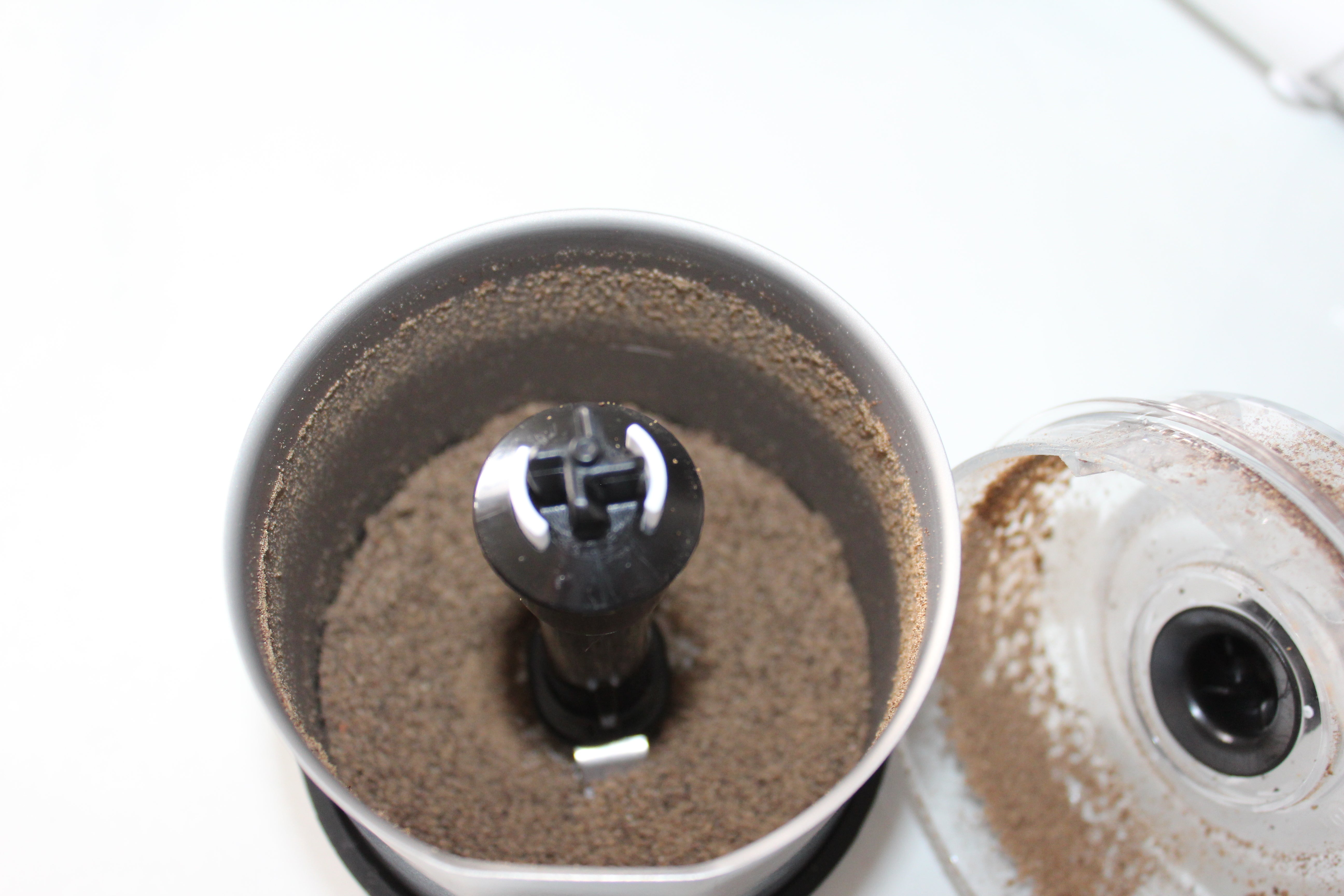 Moving onto the mini-chopper, I used it to dice an onion using a medium speed. As the bowl is quite small, I had to cut it into quarters to fit around the blades. While the lid fitted into place, in retrospect, a whole onion was too much for it to chop as only the pieces at the bottom of the bowl were diced, again using the Turbo button as a pulse. Further processing and removing a couple of quarters didn’t help resolve the situation, with parts of the onion ending up puréed and some of it partially chopped. 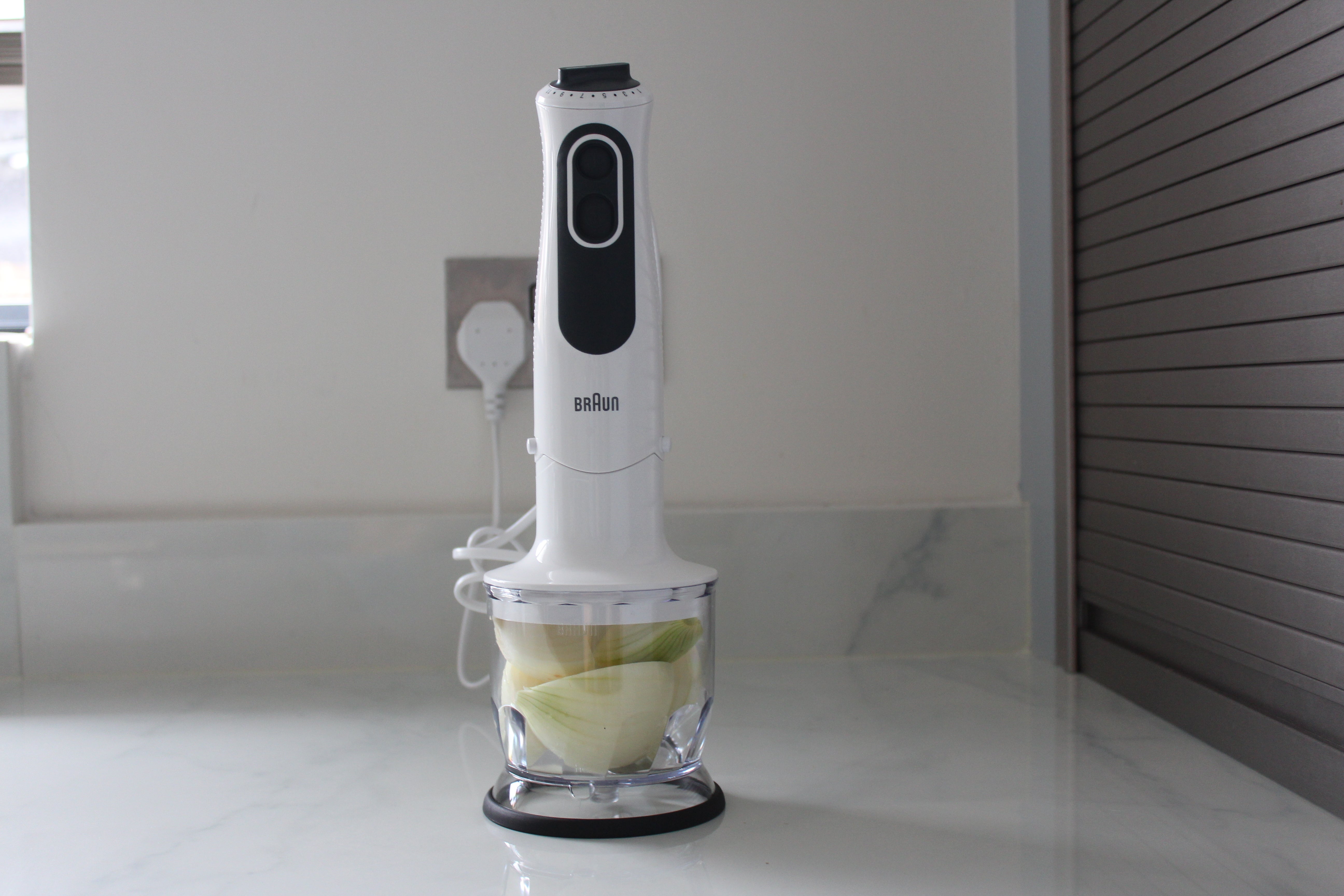 Finally, I attached the gearbox and whisk to the motor unit and used it to whip two egg whites in the beaker. The grip on the handle was especially useful here as the motor unit can shake quite a lot as it’s whisking, plus I also needed to move the whisk around the beaker for the best results. After a minute, the whites had become firm enough to be able to invert the beaker – an ideal consistency for meringues and soufflés. 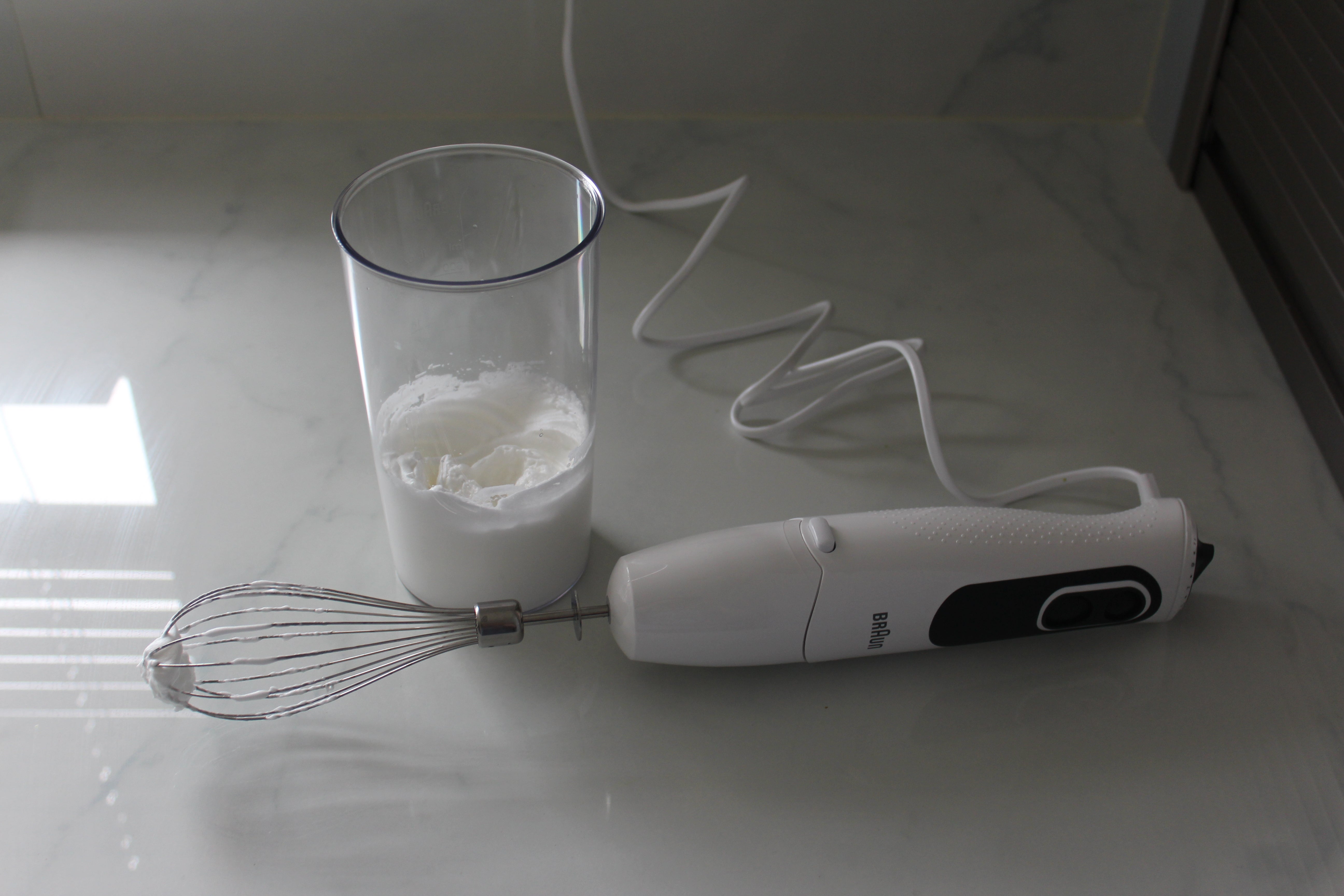 A couple of the parts aren’t dishwasher-safe, but all were simple to clean by hand with no awkward crevices, making clean-up straightforward.

It’s a mystery why the MultiQuick Spice needs 11 speeds, seeing as the majority of tasks require the Turbo mode – surely, a couple of lower speeds would suffice. That said, the blender’s versatility makes it excellent value. The spice grinder effectively puts your pestle and mortar into retirement, while space-poor kitchens will appreciate the ability to blend with a minimum of washing-up afterwards. The restrictive size of its mini-chopper makes this part less useful, and you may as well use a knife. However, the Braun MQ3126 MultiQuick Spice makes a great everyday helper for beginners and keen cooks alike.

An effortless way to spice up dull dinners, whisk, blitz and more.