What is the Cook’s Essentials 1.5L Electric Soup & Smoothie Maker?

Part of the Cook’s Essential’s range, the Soup & Smoothie Maker is an affordable buy for anyone who likes the idea of a soup maker but isn’t sure how much use you’d get out of it.

It’ll cook smooth or chunky soup, whisk up smoothies and simmer fruit compote, as well as blend on demand. A sauté function is sadly missing, meaning you won’t be able to brown vegetables or meat at the start of a cooking programme.

A good-sized jug allows up to 1.5 litres of soup to be cooked in 24 minutes on the smooth program and in 38 minutes on the chunky program, while compotes take around 14 minutes and (non-heating) smoothies three. 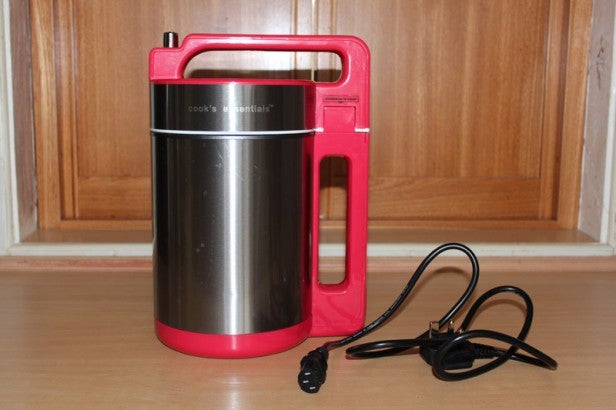 While the design isn’t as sleek as comparable jug-style soup makers, it’s practical and neat. Outside, it has a stainless-steel body twinned with a coloured plastic handle and trim, available in four colours – black, red, teal and white. Inside, there’s a non-stick interior and a stainless-steel head unit and blades.

All the control buttons are located on the top, consisting of a choice of programs – Smooth, Chunky, Compote, Smoothie, Blend – to scroll through using the Menu button, with a Start button to activate them. Each program is preset, so it isn’t possible to alter the time or temperature, and frustratingly, removing the head unit halts the program, so there’s no peeking inside to check on the cooking progress of the contents. There’s also a vent on top of the machine, to release steam as it cooks, and a liquid level sensor on the head unit that prevents overfilling. 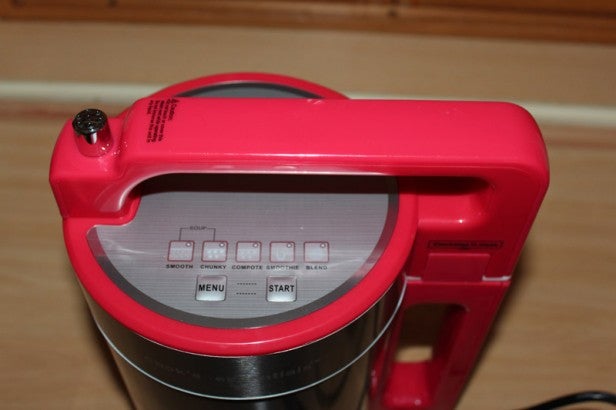 Cook’s Essentials 1.5L Electric Soup & Smoothie Maker – What’s it like to use?

Using the Soup & Smoothie Maker is fuss-free in itself, but it does require a thorough reading of the manual beforehand, as there are a few points that need to be taken into account. One is that the maker needs a minimum of 1.3 litres of liquid for the best results. This can be limiting for some recipes, such as fruit compotes, when you may not want to make a large batch. Similarly, recipes that use several drier ingredients may need a rethink to cook evenly. We decided to make a broccoli and Stilton soup to see how the non-stick interior coped with cooked cheese.

Given that there’s no pause function, all the ingredients need to be put in the Soup & Smoothie Maker at the start – spring onions, broccoli, stock and Stilton. Making sure there’s the right amount of liquid in the jug is difficult once the solid ingredients are in, as they obscure the fill-level markings inside. It’d be useful if these could be more clearly seen. Once they’re in, the head unit twists into place, locking into the top of the handle, and the appropriate program can be selected. The recipe included with the machine recommended the Smooth setting for this soup. Pressing start, the machine whirled into action, cycling through cooking and blending alternately. While doing so, it produced several bursts of steam. 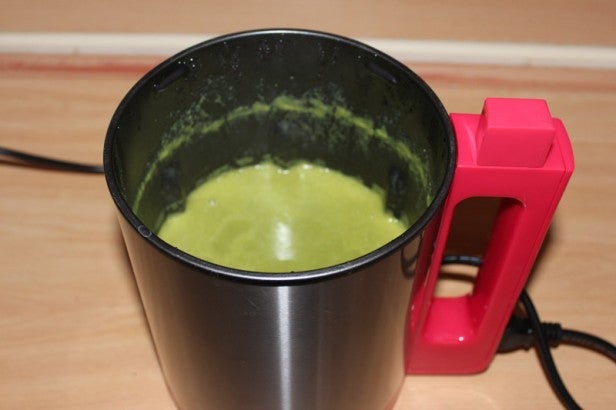 When the program was finished, the machine beeped to indicate that the lid could be removed. While extra blending is an option, the Smooth setting had definitely done its work – the resulting soup was completely lump-free. The consistency was a little thin, but the flavour was good and the soup evenly cooked.

We also tried making a rum-infused banana compote. Here, the results were more disappointing. While again the flavour was good, having to include enough liquid for the machine to work properly meant the consistency lacked viscosity. There were also two or three unblended lumps. 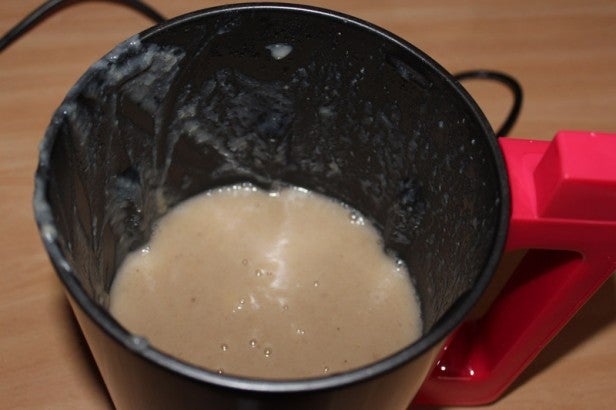 Clean-up was quick, though. The jug rinses well – it’s advisable to clean it straight after cooking – and while the head unit needs a bit more of a gentle scrub, the residue could be removed. 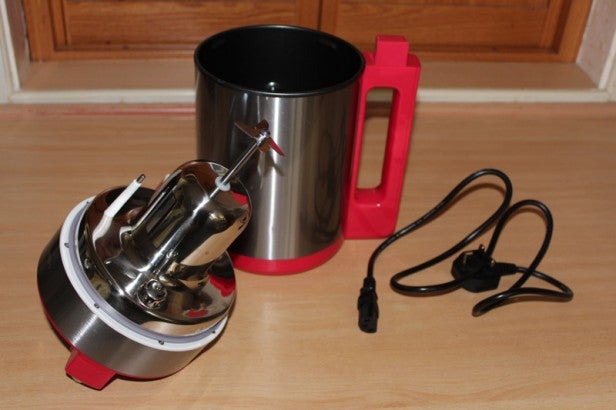 It might lack a few of the features you’ll find on more expensive soup makers, but as a budget buy the Soup & Smoothie Maker is good value for the functions it includes. Getting the best results from it involves a bit of practice and it may not work as well for some recipes as it will for others, however, so you may find a bit of persistence is a necessary ingredient, too. It’d be good if the Compote function allowed smaller batches to be made, but it’s still a thoughtful extra.

A few quirks make this machine trickier to use than others, but get past them and you’ll have all the benefits of a pricier appliance at half the cost.