What is the Cuisinart CH4BCU Mini Food Processor?

If the thought of dragging out an entire food processor to prepare just a small amount of food fills you with dread, the Mini Food Processor is an ideal solution. Dinky enough to sit out on the worktop, its double-sided blades are suited to a range of everyday prep, from chopping small quantities of nuts, vegetables, cheese and meats to grinding coffee beans, seeds, spices and chocolate. As well as basic blitzing, making sauces and dips is also part of its repertoire, with recipes for hummus, pesto and mayonnaise included, as well as ideas for making cocktails and compote. 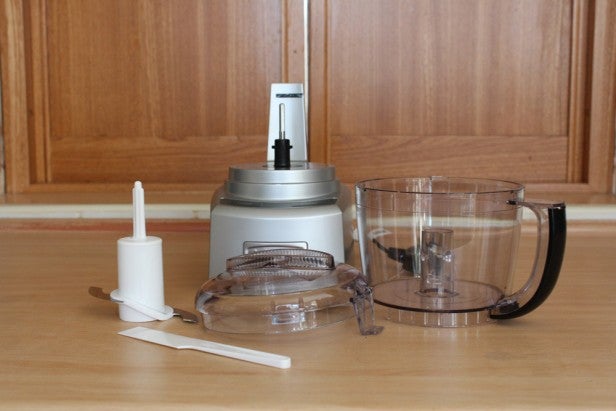 The Mini Food Processor might look every inch like a traditional food processor, but it’s not simply a sized-down appliance. Instead of multiple attachments, it comes with one set of central blades that serve two functions – the sharp side spins one way to chop food while the blunt edge spins in the opposite direction to grind. Its front panel buttons are also pared back to these twin functions, with both the Chop and Grind spinning at a single speed.

While its processing functions might be narrow in scope, there are some design features that broaden the Mini’s appeal. Comprising just three parts plus the base unit, it’s assembled and cleaned far more quickly than a large food processor, while a pair of holes in the lid allows liquids to be poured in as the machine runs without having to stop the blades.

An included mini spatula makes scrapping down the bowl after chopping or grinding effortless, while its blades stay in place even when the bowl is tipped up, so there’s no need to take them out every time you pour – ideal if you’re processing several batches of the same food. It’s also incredibly light at 1.2kg and easy to move around the kitchen or store in a cupboard. 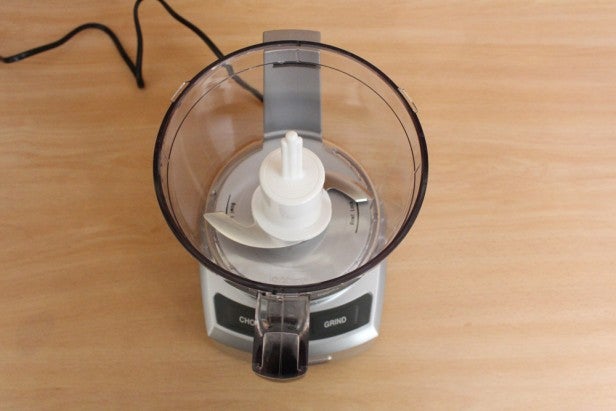 Cuisinart Mini Food Processor – What’s it like to use?

While putting the machine together is uncomplicated, it’s not entirely intuitive. The bowl and lid lock into the base using an anticlockwise rotation, with the handle sited at the front and the lid slotting into the back of the base unit. The blades are easier to fit and push and click into place in one motion.

We started by chopping celery. The size of the bowl, while a generous size at 900ml for a compact appliance, is a bit limiting. Its instructions also advise that vegetables are pre-prepared by cutting them into 1.5cm chunks – which feels like you’re still having to do some work beforehand. This does, however, ensure a more even result and one that would be hard to achieve with manual chopping. 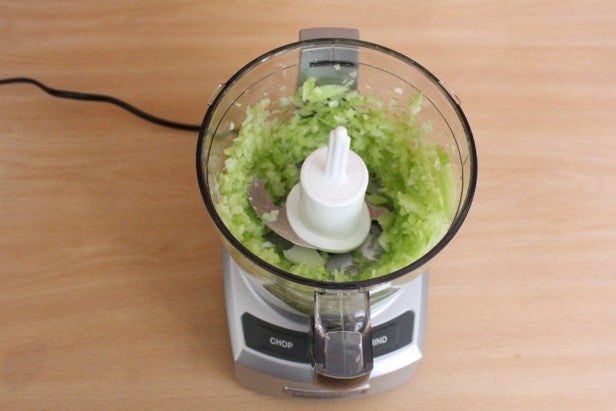 The celery was processed very finely in just a few pulses of the Chop function. Next, we tried mushrooms, a softer foodstuff. Here, the results were less consistent, with larger pieces more resistant to processing and smaller pieces tending to clump at the bottom of the bowl. Trying it again with a reduced amount of food in the bowl gave a more consistent chop but still not as successful as with a harder vegetable. Being able to vary the speed for hard and soft foods would be a useful option.

Finally, we tried crushing coffee beans with the Grind function. This takes a little longer and is best achieved with several longer pulses. Even so, after about a minute, the grind was still relatively coarse, which is suitable for mild coffee but not if you like it stronger. Confusingly, while there’s a recipe included that calls for ice cubes, crushing ice in the Mini isn’t recommended as the blades may break. We tried it with thin shards, however, and it performed well. 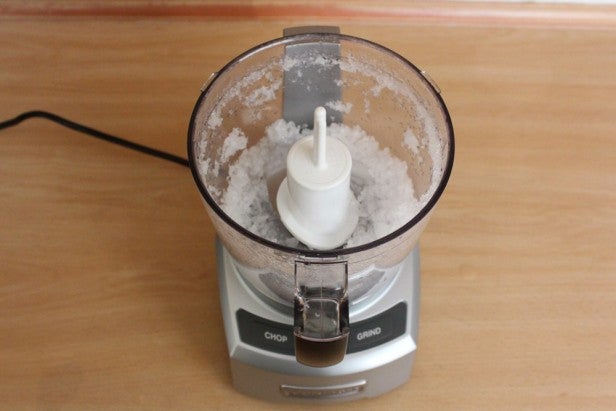 Cleaning is just as simple as using the Mini Food Processor. It takes seconds by hand, so it can be used for consecutive tasks, or all the parts that come into contact with food can be popped in the dishwasher and come out sparkling.

Should I buy the Cuisinart Mini Food Processor?

It’s not a replacement for a larger, more powerful food processor, but where the Cuisinart Mini Food Processor excels is fine chopping. Twin functions give it an extra edge over similar appliances, which tend to only offer one, while the ease of cleaning means you’ll be able to use it for a variety of foods as you cook, with just a rinse and a wipe in between.

While the grind function is a useful option and it handles some foods well, it’s not as fast or thorough as an automatic grinder when processing coffee beans, so make sure you’ll get use out of it as a chopper, too.

You’ll never have to buy pre-chopped herbs or mayonnaise again, thanks to this handy helper. Handles some tasks better than others, though.

Zuhaib Abid - January 29, 2021
Top 10 Ginger Benefits To Improve Your Life. When you first think of ginger, you probably think of those gingerbread houses during the holiday season, or maybe ginger ale, the carbonated soft drink But, ginger is a popular spice with some powerful medicinal properties It has become well known for its many health benefits and people around the world consume it for this reason In this list, we explore Top 10 ginger benefits.