Uniting a low-fat fryer and multicooker, the Multifry Extra Chef is one of three Multifry models designed to make creating healthy meals easy. Unlike other low-fat fryers, it’s equipped with upper and lower heating elements, plus a fan to help distribute the heat, enabling it to cook a variety of foods, from risotto, cous cous, stew and ratatouille to pizza, cakes and pies.

A removable paddle gives the option of stirring or not, while its capacity is impressive – it has the ability to cook up to 1.7kg of fresh potatoes (about eight portions) in a mere 14ml of oil, so it’s great when catering for a crowd. Plus, if you’re stuck for meal ideas, there’s a Recipe Book app with 250 recipes. 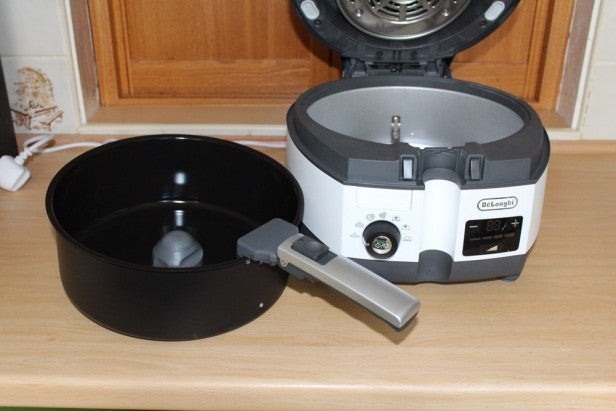 Similar in looks to other low-fat fryers, it’s clear that some additional thought has been put into the Multifry Extra Chef’s exterior. Its controls are front and centre, so there’s no need to lean over the appliance, while its recipe functions are clearly shown on a dial. Cooking time and temperature can both be toggled using buttons or you can go with the pre-set option, giving a generous amount of cooking flexibility. There’s four pre-set programs (Potatoes, Pizza, Cake and Stew) and three special programs (Pan Function, Oven Function, Surround Function) on the dial, with a lid-release button above.

Inside, you’ll find a ceramic-coated cooking pan with handle that can fold in when it’s in use or lock into place when the pan’s removed from the base. The stirring paddle fits over a pin in the centre of the pan and can be easily removed for cleaning or when it’s not required. The transparent portion of the lid can also be detached for cleaning. 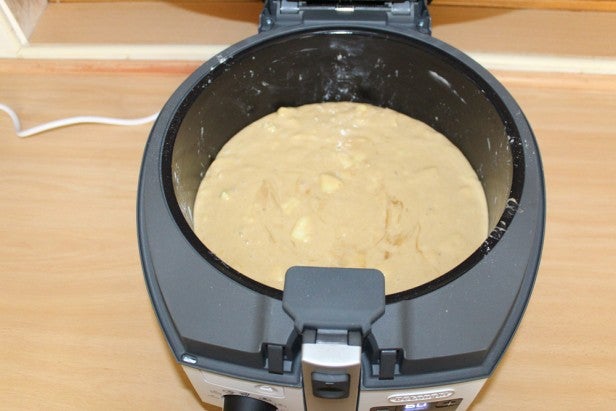 Despite having lots of functions, the Multifry Extra Chef is pretty simple to use – select a function, toggle the temperature or time if needed and hit start. There’s no preheating time needed, so it’s easy to get cooking straight away.

We began by using one of the included recipes to bake an apple and yoghurt cake. After mixing the batter, we poured it into the greased and floured pan without the mixing paddle in place. Selecting the Cake function on the dial, it showed a cooking time of 35 minutes on the temperature level of two and we started the program. The only noise to show that it was baking was a quietly whirring fan. While the clear portion of the lid makes it easy to keep an eye on progress, it’s also handy that the lid can be fully opened to check – and that while doing so, it’ll pause the program. 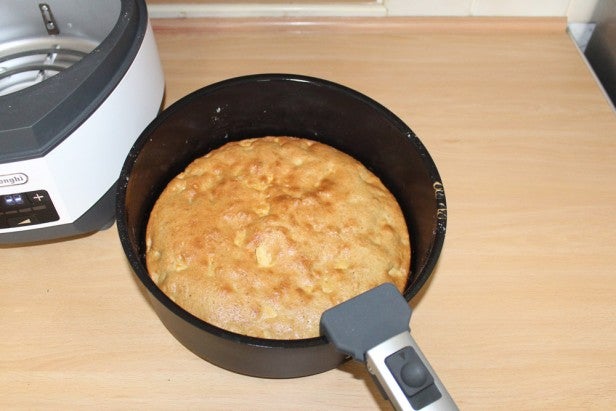 The resulting cake was perfectly baked by the time the program ended – fluffy, moist and with a pleasingly sweet, sticky crust. The only unusual feature was that it had a slight flattened side where the pan joins the handle and a small hole in the base from the mixing paddle pin.

Next, we tried pizza. Making the dough from the recipe provided, we proved it then flattened it into the shape of the pan, again without the paddle in place. It was hard not to tear a hole in the dough from the projecting pin. Selecting the Pizza setting, we followed the recipe’s advice for cooking the base of the pizza spread with tomato paste for the first portion of the program, then adding cheese halfway through. Unfortunately, by halfway through the cooking time, the tomato paste had started to brown, and by the end of the program it had burned slightly. The pizza base and cheese topping were also overcooked, though not burned, suggesting that the cooking time or temperature on this program may need to be adjusted.

Finally, we prepared around 700g of chipped potatoes by peeling, slicing, rinsing and drying the potatoes, before placing them in the pan with the paddle. Adding oil up to the suggested mark of 1 using the included oil measure, we poured it directly into the pan and selected the Potatoes program for a cooking time of 23 minutes on heat setting three. Its paddle began to stir, distributing the oil while the appliance began to fry. The chips produced were cooked but disappointing in terms of crispness and colour, with brown patches and a soft texture, again suggesting that some tweaking might be required.

Clean-up was simple – all the removable parts are dishwasher safe, although it warns that washing the pan in the dishwasher too often could make the non-stick the ceramic coating less effective. 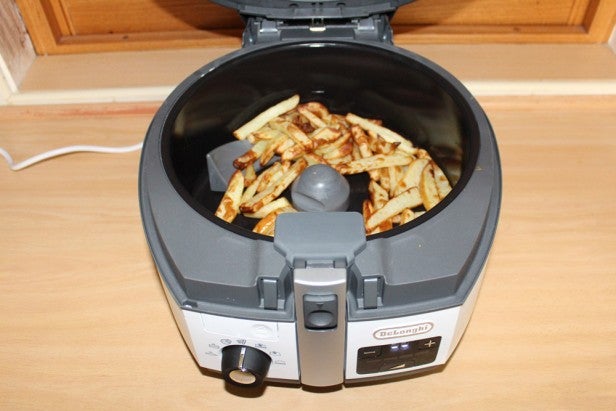 The Multifry Extra Chef excels at being a large-capacity multicooker, and its ability to handle such a variety of foods with stirring can only be a boon in a busy family kitchen. Where there could be some room for improvement is as a low-fat fryer. We’re sure it’s capable of producing golden fries, but our attempt suggested that there might be some experimentation involved in matching up the capacities, cooking time and temperature.

Unexpectedly brilliant at baking, the Multifry Extra Chef is a handy
appliance for large family meals, but requires practice for decent
frying results.