What is the Lakeland Digital Ice Cream Maker?

Freeze-first ice cream makers are typically basic, but Lakeland’s model adds a layer of useful tech. Not only does it have a timer, it comes with a large digital display that means you can set it in minutes and watch the seconds count down to your ice cream being ready. After pre-freezing the bowl for 12 hours, it’ll take around 25 minutes on average to make some of the recipes included with the machine. These range from vanilla ice cream to more exciting mint choc chip and pistachio, as well as dark chocolate orange frozen yogurt and mixed berry sorbet. 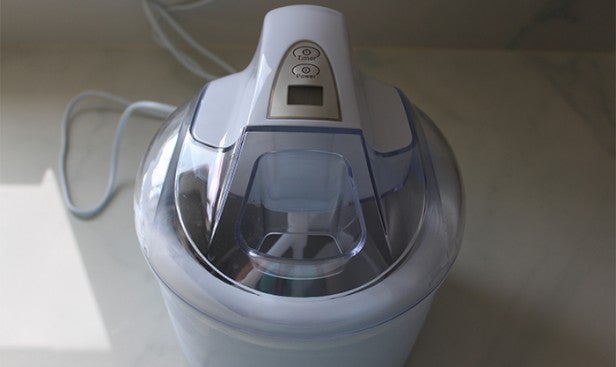 Lakeland’s ice cream maker has the benefit of feeling more premium than equivalent models. As well as a sturdy plastic lid that twists and locks securely onto a one-piece freezer bowl filled with coolant, it features a discreet logo on the front and a sleek digital motor. The lid’s chute is generous enough for careful pouring and adding extra ingredients towards the end of churning. Beyond that, the design follows a simple course, with an angled paddle to churn the ice cream and a spindle to connect it to the motor unit. 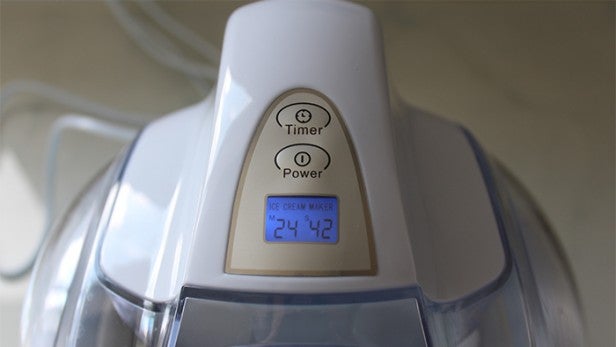 The timer is set by pressing the button repeatedly, each push adding an increment of five minutes onto the running time. It starts counting down by itself, meaning that the first 10-15 seconds or so tend to have elapsed by the time it’s possible to pour all the mixture in. There isn’t a way to add on minutes once the timer’s started counting down but pressing the timer button again resets it to the original amount of programmed time.

Lakeland Digital Ice Cream Maker – What is it like to use?

The bowl’s minimum 12-hour freezing time makes this a machine where it’s best to plan the day ahead for ice cream or keep it in the freezer permanently. Fortunately, the bowl was compact enough to fit into a freezer drawer. Putting the ice cream maker together was simple, helped along by clear photographic-style instructions. The lid locked easily in place and I was ready to start. 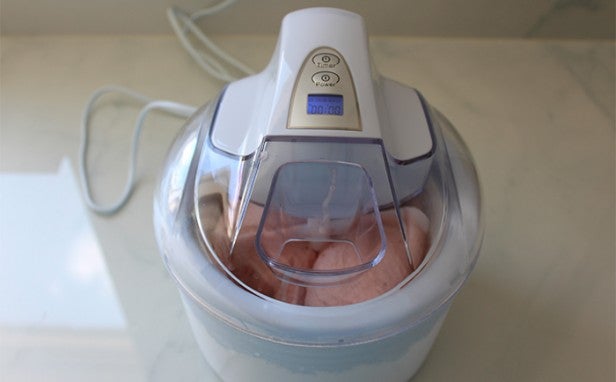 The first recipe I tried was strawberry ice cream, a combination of cream, milk, fruit, sugar and egg yolk that was combined in minutes before chilling. I programmed the timer for 25 minutes and once the paddle had begun to turn, poured the mixture in. The top of the spout is fairly wide but as it narrows at the bottom, there were still some splashes when pouring from a jug. As the paddle turned, the machine was reasonably quiet and unobtrusive. After 15 minutes, we checked on the ice cream’s progress. It had begun to gain some texture but was still mostly liquid. 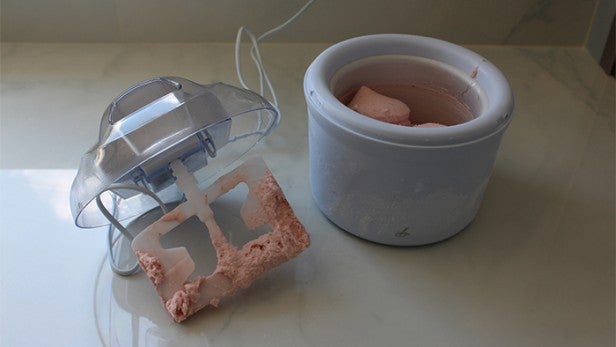 Once the 25 minutes had run out on the timer, the paddle stopped turning. There wasn’t an alarm to alert me to this, which would have been useful. I also struggled to take off the lid as there wasn’t a place to grip it firmly and the exterior of the bowl was slippery. After concerted effort while wearing oven gloves, I was able to separate the two. The finished ice cream had gathered around the paddle and was of a consistent texture – soft but not sloppy, and easy to remove in solid scoops. 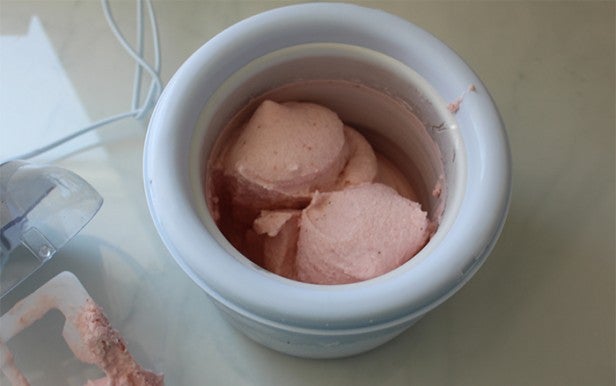 Next, I tried making lemon sorbet. This recipe required preparation about an hour ahead to allow for cooling and used lemon zest and juice with a sugar and water mix. As it was a thinner liquid, it poured into the spout without splashing and after about 10 minutes into the 25-minute suggested churning time, had begun to appear slushy. Once the time had elapsed, the sorbet had formed clumps around the paddle and while it was still slightly runny in places, was easily removed from the bowl and hardened well in the freezer for another 30 minutes. 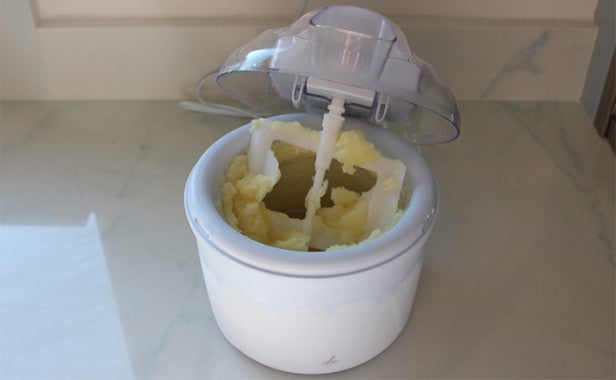 None of the parts are dishwasher safe so required cleaning by hand. However, this was straightforward as there were no awkward crevices.

Should I buy the Lakeland Digital Ice Cream Maker? 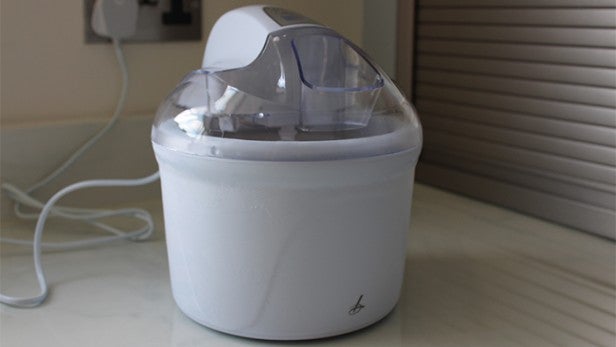 The design and features of the ice cream maker are a step in the right direction for freeze-first models but there could be some improvements. An alarm would be handy to remind you when it’s done, as would the ability to start the paddle turning before activating the timer. Where it does well is the recipe inspiration to get you started, the inclusion of a timer at all when many don’t, and excellent build quality. All of these factors mean it’s great for using with the kids to create fantastic flavours whatever weather the summer may bring.

Given the Andrew James Ice Cream Maker is nearly half the price and makes perfectly good ice cream, it seems a bit much to ask for £25 more for a simple digital timer. If it’s an absolute must for you, then Lakeland’s model will do you proud. Otherwise, you could save a fair bit of cash.

It might cost a bit more than a budget maker but this machine is sure to become a family favourite.