What is the Morphy Richards 432020 Spiralizer Express?

Encouraging you to spiralize your way to five a day, the Spiralizer Express is a zero-effort appliance that’ll turn your hard fruits and vegetables into thin ribbons. It’s perfect for ‘courgetti’ and other vegetables sliced to mimic pasta, as well as salads and desserts, so health-conscious cooks are sure to love it.

There are some recipes included and more are available on the Cook and Create app, along with plenty of tips to help you get the most out of the machine. 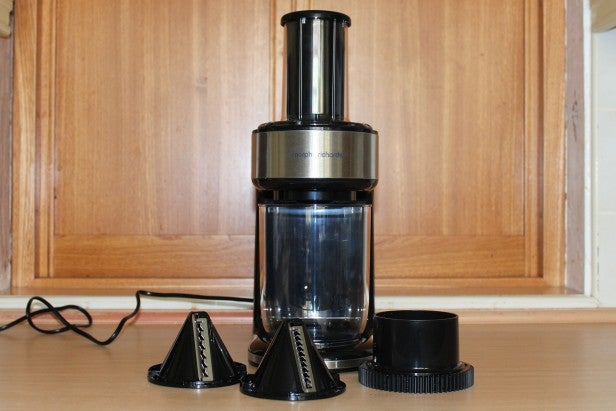 Electric spiralizers form a relatively new category and, as the manual type come in a variety of shapes, there was little precedent in terms of design. Resembling a downsized coffee percolator, the Spiralizer Express requires fruit and vegetables to be fed from the top towards the blades, so there’s little pressure needed. The ribbons collect in a beaker below, compacting in swirls – no need to constantly empty it if you’re prepping a large batch.

There’s a discreet flick switch on one side to turn the machine on, and a plunger to attach your food to, which features a cross that sinks into the vegetable to keep it static during operation. It comes with two blades: a thin cutter and a thick cutter for different widths of spirals. The blades slot into a drive sleeve that nestles into the top of the machine and the whole is topped by a combined lid and feeder chute that twists and locks into place.

Morphy Richards 432020 Spiralizer Express – What’s it like to use?

Assembling the machine was simple; it’s pretty intuitive to put together and we were ready to spiralize in seconds. We started by making courgetti using the finer of the two blades. After topping and tailing a courgette – it can be peeled for a greater similarity to spaghetti – I halved it and attached the plunger. Gently pushing it towards the blade, it produced consistent swirls of vegetable that collected in the beaker below. There were a few scraps of skin that had been peeled off during the spiralizing and seeds to remove, but otherwise I was left with long runs of courgetti and a cone-shaped end piece of courgette that could be sliced up and used in another dish. 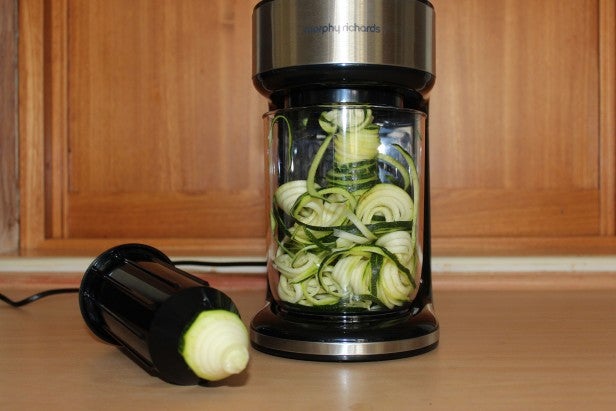 Next, I tried spiralizing some sweet potatoes using the broad blade. This was more difficult. Once peeled, the sweet potato needed to be halved or quartered in order to fit down the feed tube. A few attempts ended with the potato becoming stuck on the blade and then twisting against the pusher, gouging a hole in the vegetable that made it unsuitable for further spiralizing. Some pieces did go through the blades, though, and this produced good lengths of sweet potato ribbon.

We finished by spiralizing peeled apples using the broad blade – ideal for making desserts, such as a suggested apple meringue pie. While one of the apples was small enough to go through the spiralizer whole, some of the slightly larger ones needed to be halved in order to fit down the tube. The spirals from the whole apple were significantly longer and more consistent, with those from the half apple pieces tending to be short and scrappy.

None of the parts are deemed dishwasher-safe, so all of it needed to be washed by hand. The beaker, feed tube, plunger and drive sleeve were easy to wash, but the blades were trickier, especially at the narrow point where scraps of vegetable tended to become stuck. A dedicated cleaning brush would’ve been useful. 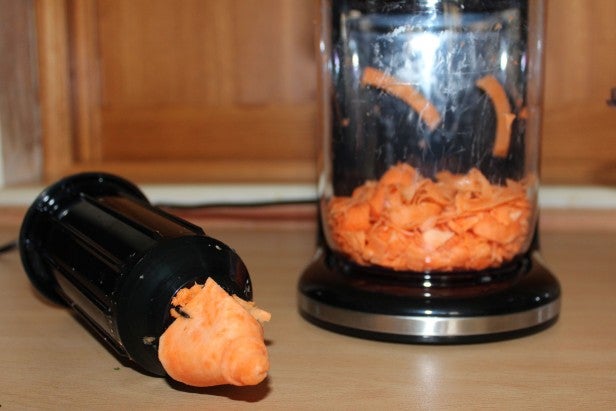 As spiralizing grows in popularity, a machine that can produce swirls of almost any hard fruit and vegetable without fuss, mess and hassle is a clear winner. What really makes the Spiralizer Express great, though, is its recipes, helping it to become more than just a one-trick pony. Perfect for those looking to cut down on carbs, go gluten-free or tempt kids to eat five-a-day, its twist-free operation is a plus for anyone with joint problems.

It’d be good to see a slower speed to help it handle vegetables that require a bit of practice to get right, such as sweet potato, and a wider feed tube to reduce prep time. Beyond that, it’s a smart idea that’s been executed well.

Take the Spiralizer Express for a spin and mealtimes will never be boring again.