What is the NutriBullet?

The NutriBullet is one of a new generation of compact blenders, where the jug or cup serves as a receptacle to consume smoothies on the go or to store them.

Based on the design of the Magic Bullet blender, the NutriBullet’s concept is about getting the most from your food. It aims to blitz fruit, vegetables and seeds to release the nutrition not usually liberated by chewing alone, and comes with a user guide and recipe booklet that expands further on this idea.

The booklet also contains guidance on which foods are best to eat, information for using the NutriBullet as part of a diet plan, and some general recipes – such as soups and main meals – that don’t even require the NutriBullet. The tone is a little overblown, but look beyond that and there’s plenty of sound advice and tips to help you get your five-a-day with the NutriBullet. 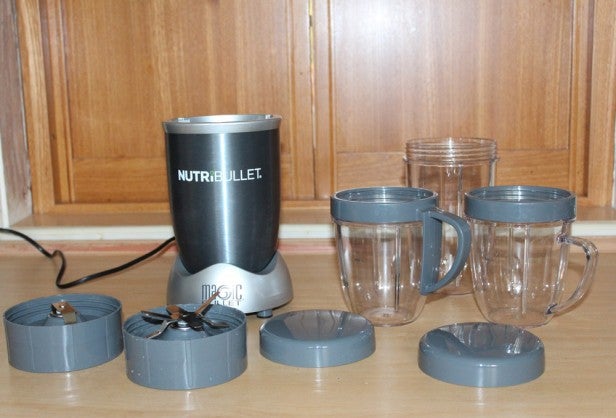 Unlike a traditional blender, the NutriBullet is slim and small, sitting snugly in a corner when not in use or tucking away in a cupboard. Bullet-shaped yet otherwise subtle in design, its base unit has a graphite-coloured brushed metal finish, while the cups, handles and lids are plastic. It’s light at just 1.8kg, so easy to move around, and the power cord is a decent 145cm.

There are no buttons for switching it on, changing speed or setting functions, which also results in a sleek exterior. Instead, to blend or grind, it’s a case of screwing on either the extractor or milling blades to a large or small cup with the ingredients inside, then pushing the cup down into the base and twisting it into place until the motor starts. You just leave it running until everything’s blended. The NutriBullet uses a ‘cyclone’ motion to help draw ingredients down towards the blades, and to stop it you just untwist the cup. 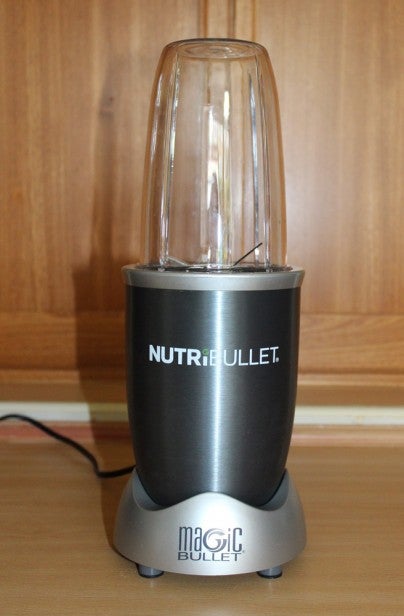 While the quick-start guide leaves a few questions unanswered, the full user guide gives a clear explanation of how the machine works. The premise is simple: each ‘NutriBlast’, as the recipes are called, consists of 50 per cent fruit, 50 per cent vegetables, some optional seeds or nuts, and water. Connect the blades to the large cup, pop onto the base unit and blitz.

We started with the ‘toxin cleansing blast’ – a mixture of spinach and fruits. While at first the spinach stayed resolutely at the top, taking the cup off the base unit and giving it a shake soon solved the issue. It then quickly became incorporated and thoroughly blended. The result was a sweet, thick smoothie – for thinner blends, it advises adding water up to the maximum marker on the cup. There was a hint of texture and no evidence of spinach beyond the green shade of the mixture. 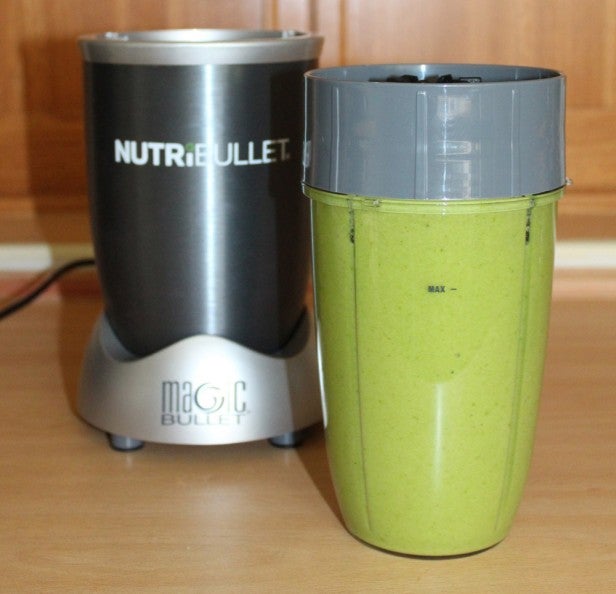 Next, we tried the ‘immune booster’ – a similar recipe, but substituting the thin leaves of spinach for the tougher stalks of spring greens. As suggested, we also added a ‘boost’ in the form of a sprinkling of sunflower seeds for it to grind through. Blending this drink took a little longer and this time, although there was no indication of the spring greens in the taste, which was pleasantly palatable, the texture retained more pulp.

Finally, we used the milling blade and small cup to grind some seeds. A powdery, fine result was achieved almost instantly. Unscrewing the blades revealed that some of the powder had clumped around the top of the cup and spilled out, so it’s advisable to tap the cup before opening to settle the contents. 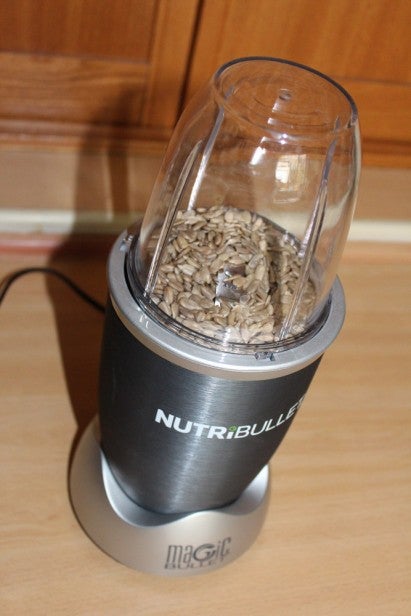 Should I buy the NutriBullet?

It’s a smart purchase if you struggle to eat enough fruit and vegetables or want to find a way to incorporate more in your diet without it becoming boring and lacking in variety. The NutriBullet doesn’t just make it simple to turn them into an appetising mix; its accompanying recipes will expand the range that you consume by suggestion.

Its neat size means it can become a worktop staple without taking up much space, and because all the skin, stalks and suchlike can be incorporated into each recipe – apart from certain fruit seeds detailed in the user guide – there’s more nutrients in each glass than in fruit and vegetable juices.

Proving that sometimes the simplest ideas are the best, the NutriBullet is a user-friendly way to make tasty smoothies an effortless daily habit.