What is the Tefal FR804 Oleoclean Pro?

When only a deep fat fryer will do for triple-cooked chips or battered treats, make sure it’s a model that’s smarter. The Oleoclean Pro takes the things that make deep fat frying a chore – cleaning up, particles of food lingering in the oil, a greasy exterior over time – and makes them disappear. Not only does it dismantle to be popped in the dishwasher, it features a filtration system that drains the oil after cooking into a sealed container below so you can use it again. Plus, while it’s not exactly a health fryer, it features a heating system that provides ideal temperatures, resulting in faster sealing of food for less oil absorption. 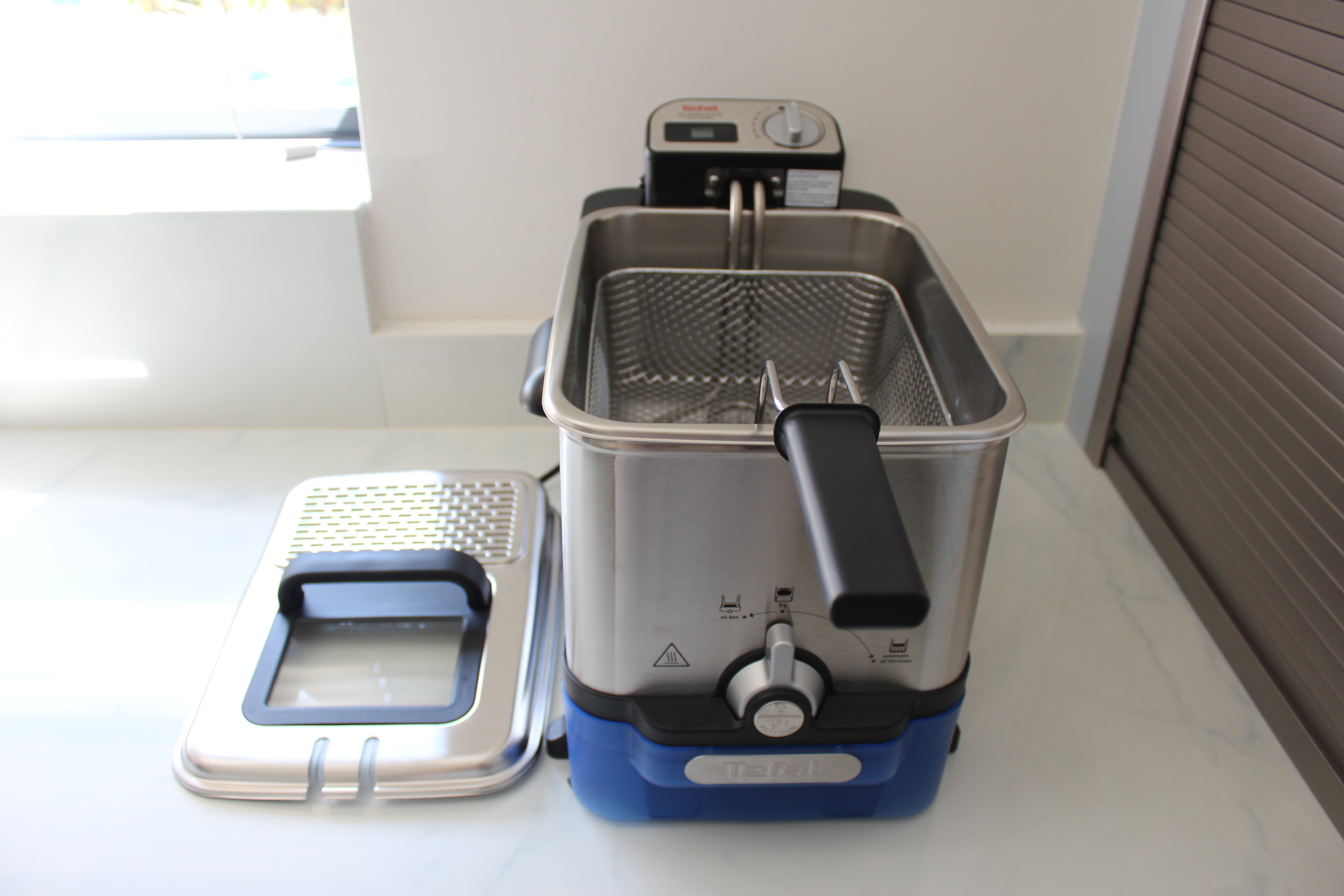 You can easily fry a family-sized feast with the Oleoclean Pro – its stainless-steel bowl can accommodate up to 3.5 litres of oil – meaning that it also takes up a fair amount of space. On the plus side, its rectangular shape means it can rotate to sit at the back of a worktop when not in use, and the frying basket handle can be stored inside. It’s not especially heavy at 4.9kg, so could feasibly be stored on a shelf. It comprises a stainless-steel housing (with a dial that can be set to frying mode, oil draining or to release the oil box), a heating element with the controls attached to it (the only part not dishwasher-safe), a plastic lidded oilbox, fryer lid with an odour filter and viewing window, bowl and 1.2kg-capacity basket. 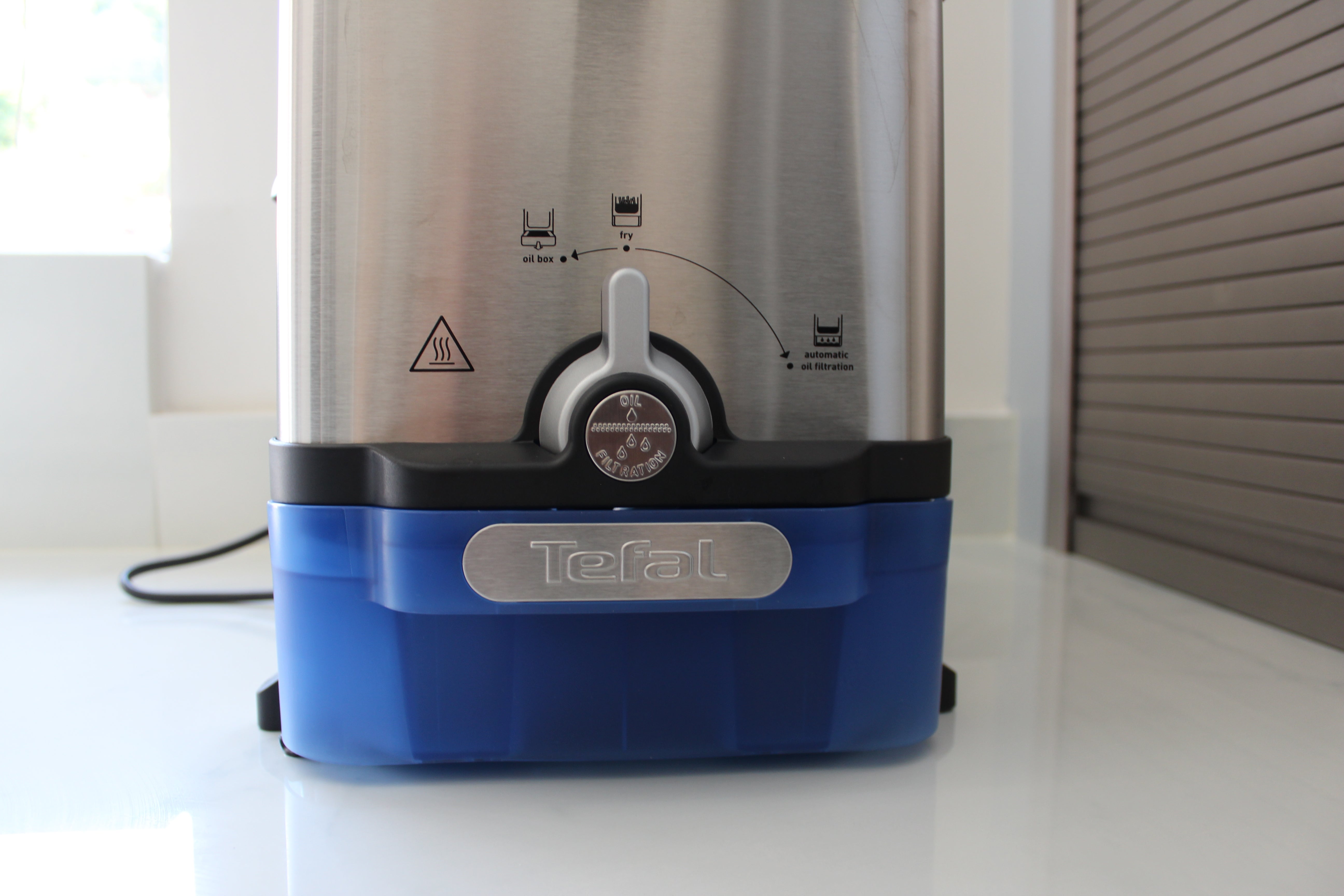 The controls are straightforward – there’s a switch at the side to turn it on, a countdown timer that can be set in minutes (with the final minute shown in seconds), and a temperature dial that ranges between 150-190C. Once cooking has finished, turning the dial on the housing to filter drains the cooled oil from the bowl through a circle of mesh in one corner and into the oilbox below. It can then be removed and stored. 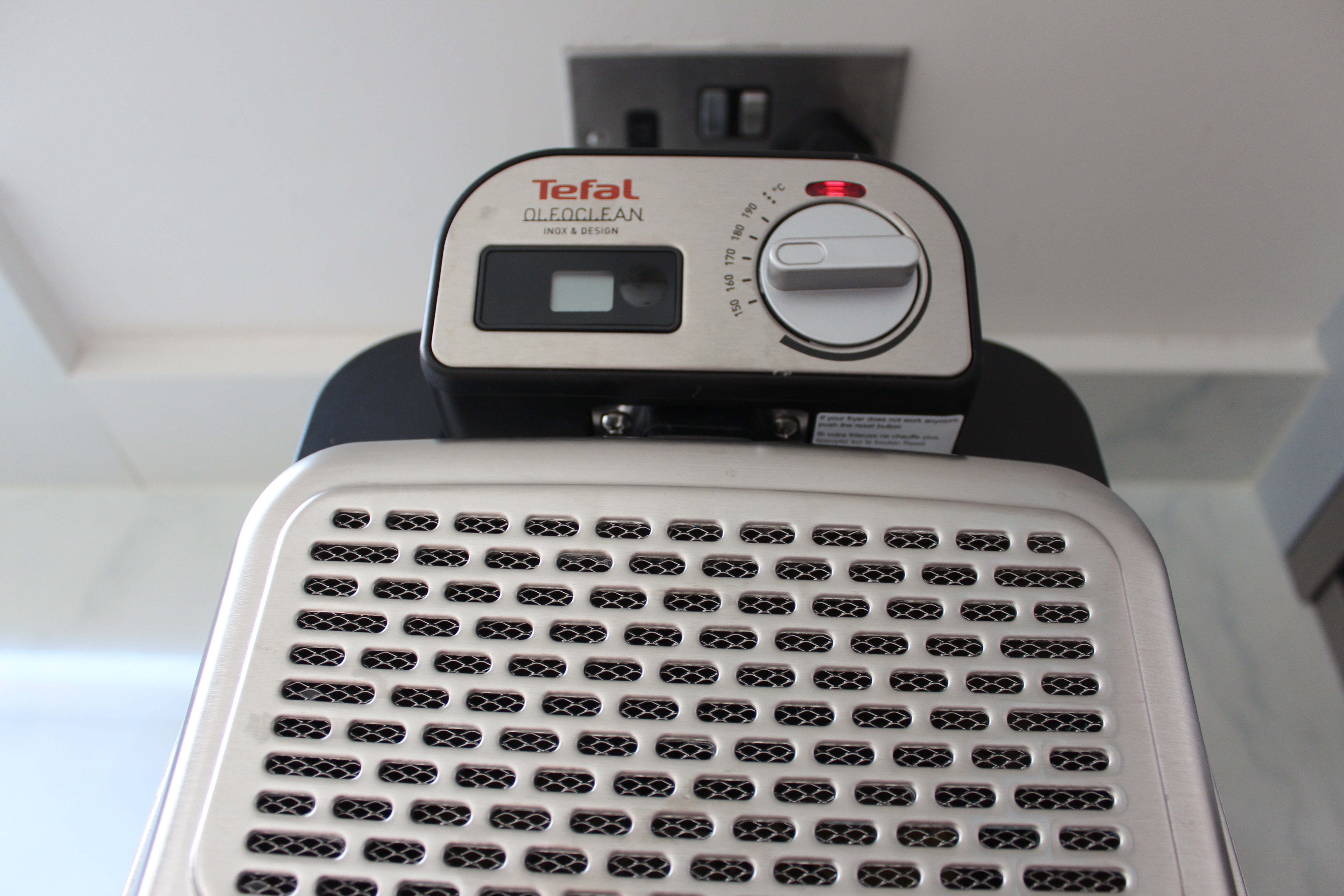 Tefal FR804 Oleoclean Pro – What’s it like to use?

Stock up on oil if you’re planning to use the Oleoclean Pro. It requires a minimum of 2.8 litres but on the plus side, you won’t have to measure it out – there are minimum and maximum fill lines on the inside of the bowl. I filled it with vegetable oil but you can also use sunflower. There weren’t any recipes but there was some time and temperature guidance. 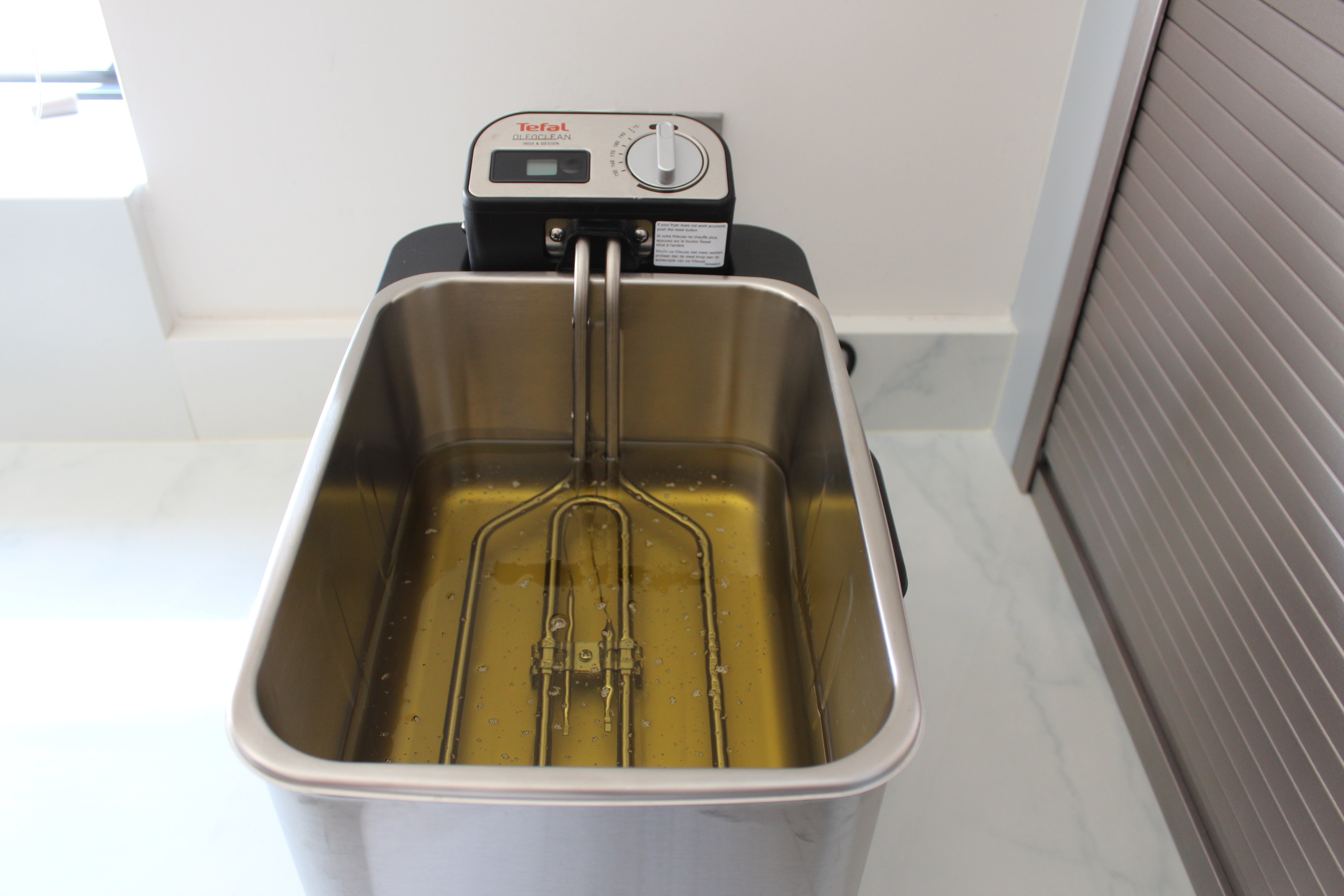 I started by cooking chips, using 600g of peeled chipped potatoes, which filled the basket halfway. It recommended rinsing and drying them raw potatoes before double frying them at 160C for 12-15 minutes. The oil took a few minutes to reach temperature. 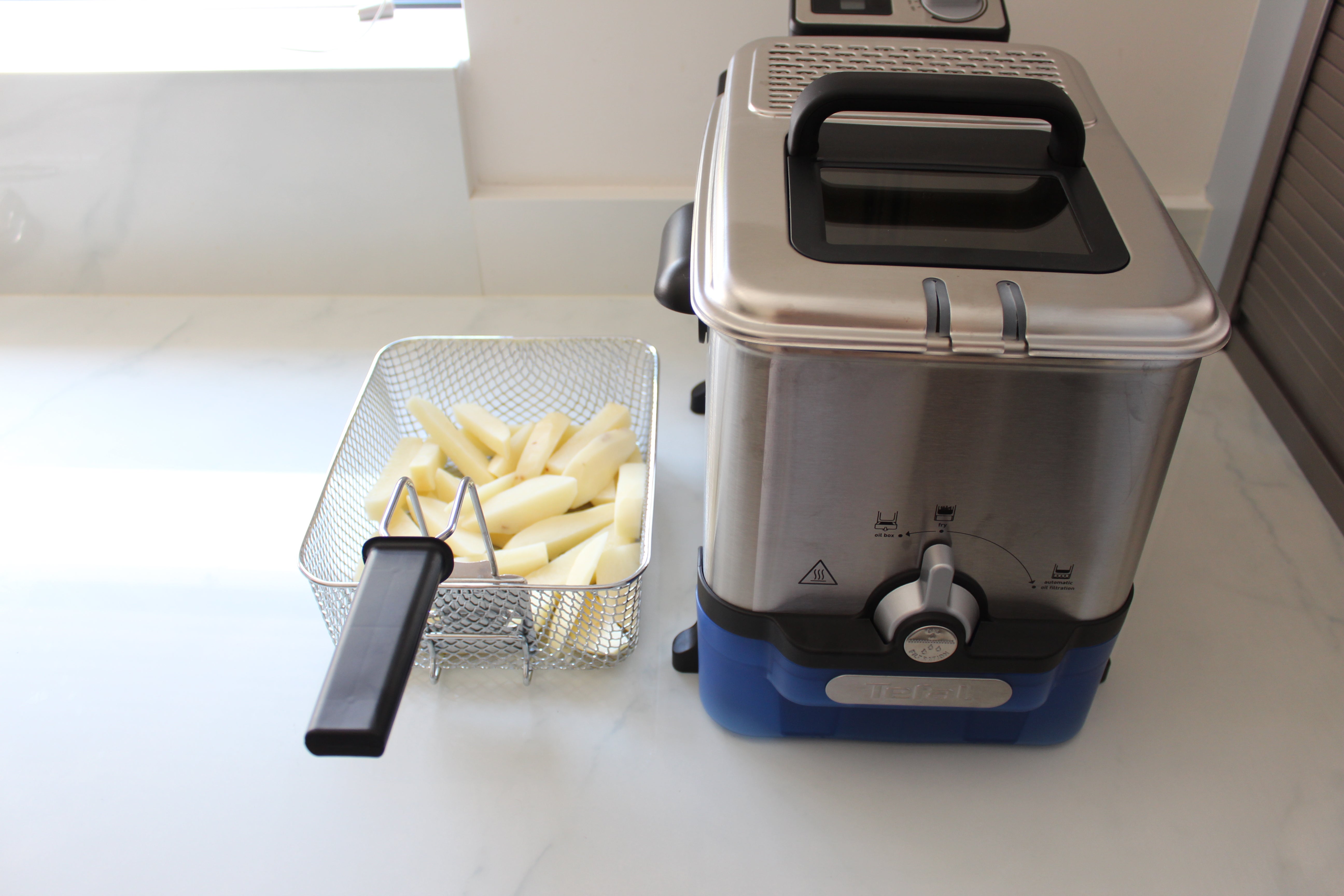 Once it had I lowered the basket into the oil, there was no splitting or splashing and it was easy to replace the fryer lid as there were grooves in it that showed which way it should sit. 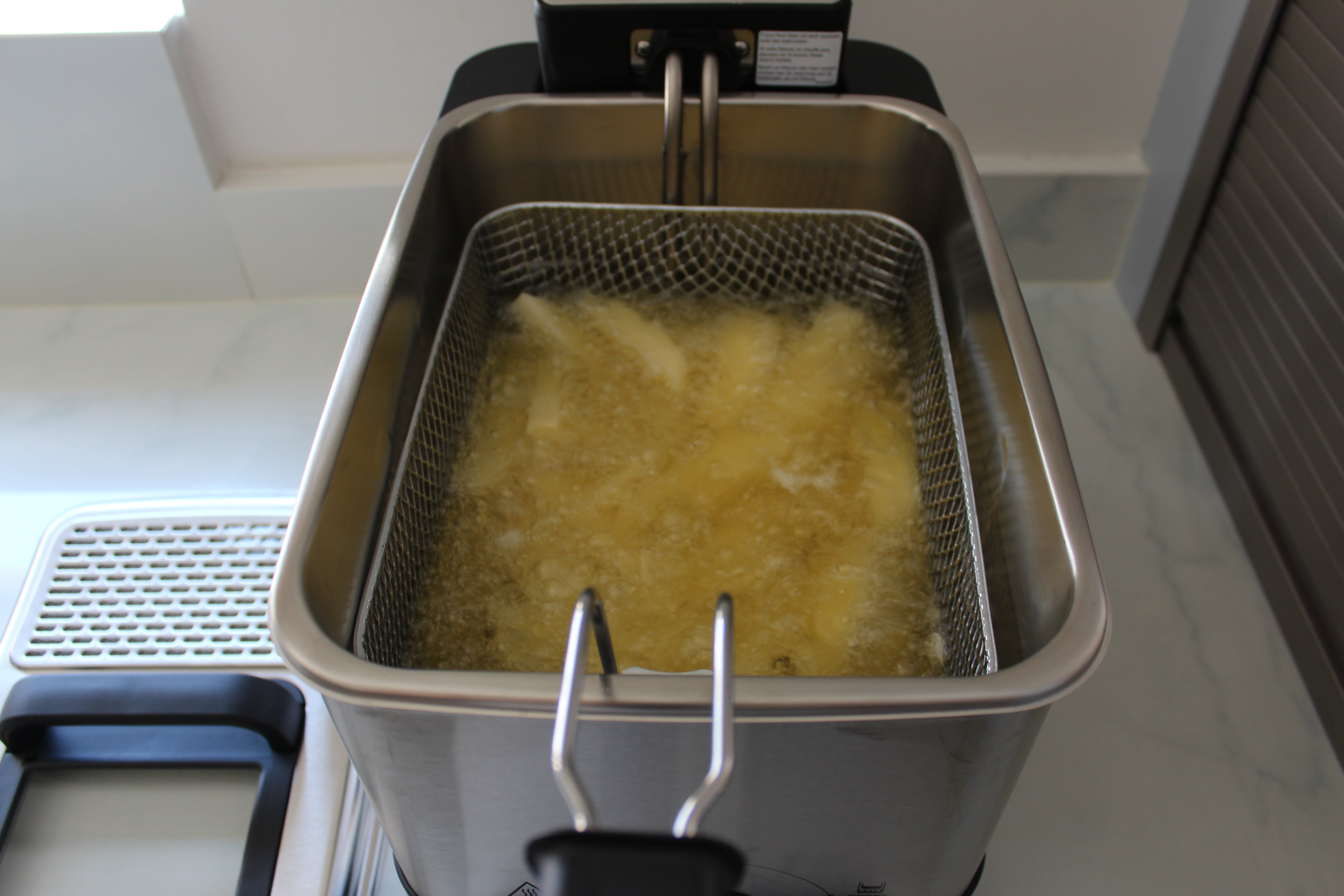 Some steam was emitted as the chips cooked and while the odour filter helped cut down the smell, there was still an aroma of frying. The viewing window steamed up as the chips fried, so I had to lift the lid a couple of times to check on progress. 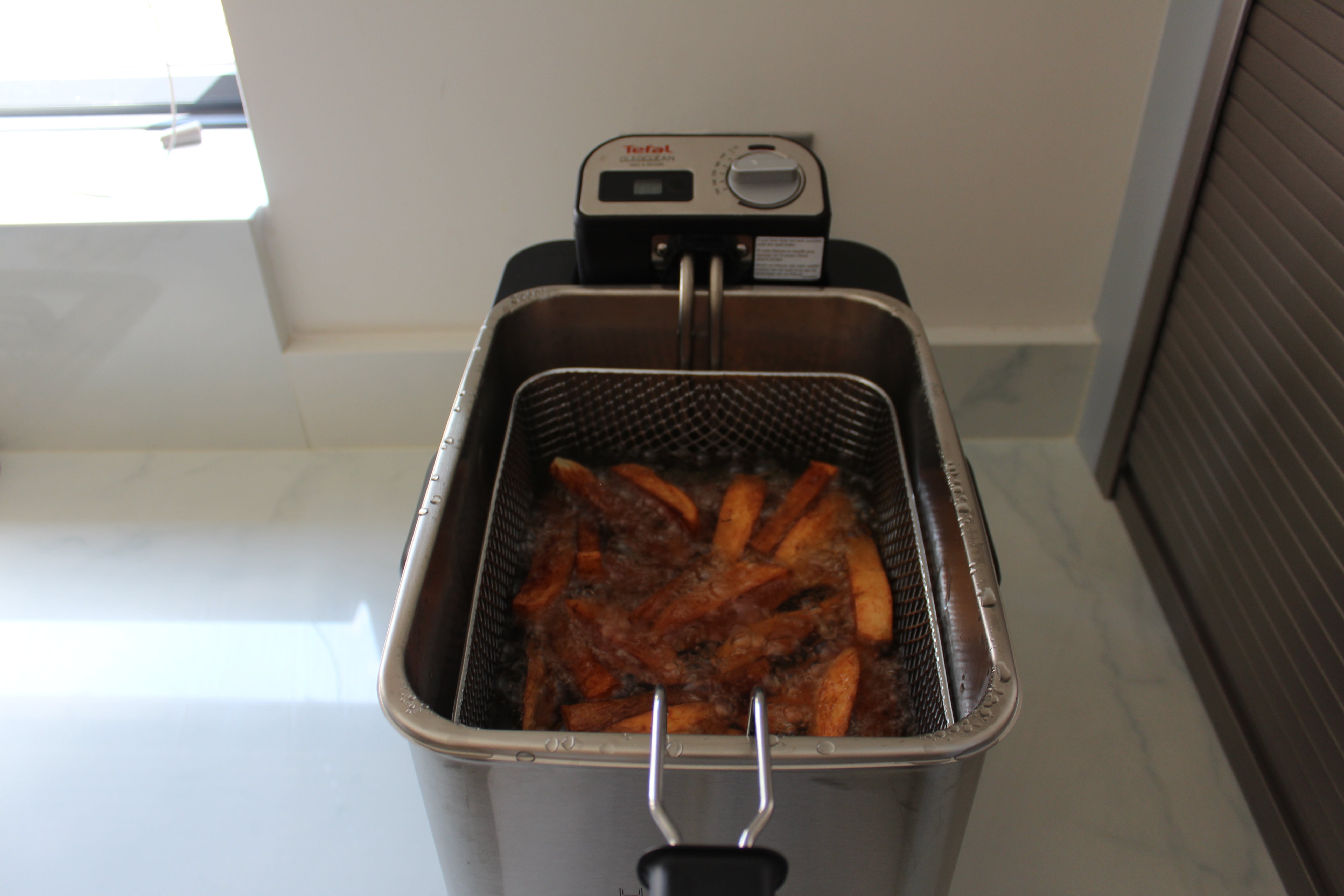 After 13 minutes, I removed the chips from the oil and they were already very brown – a shorter first fry would have been better. 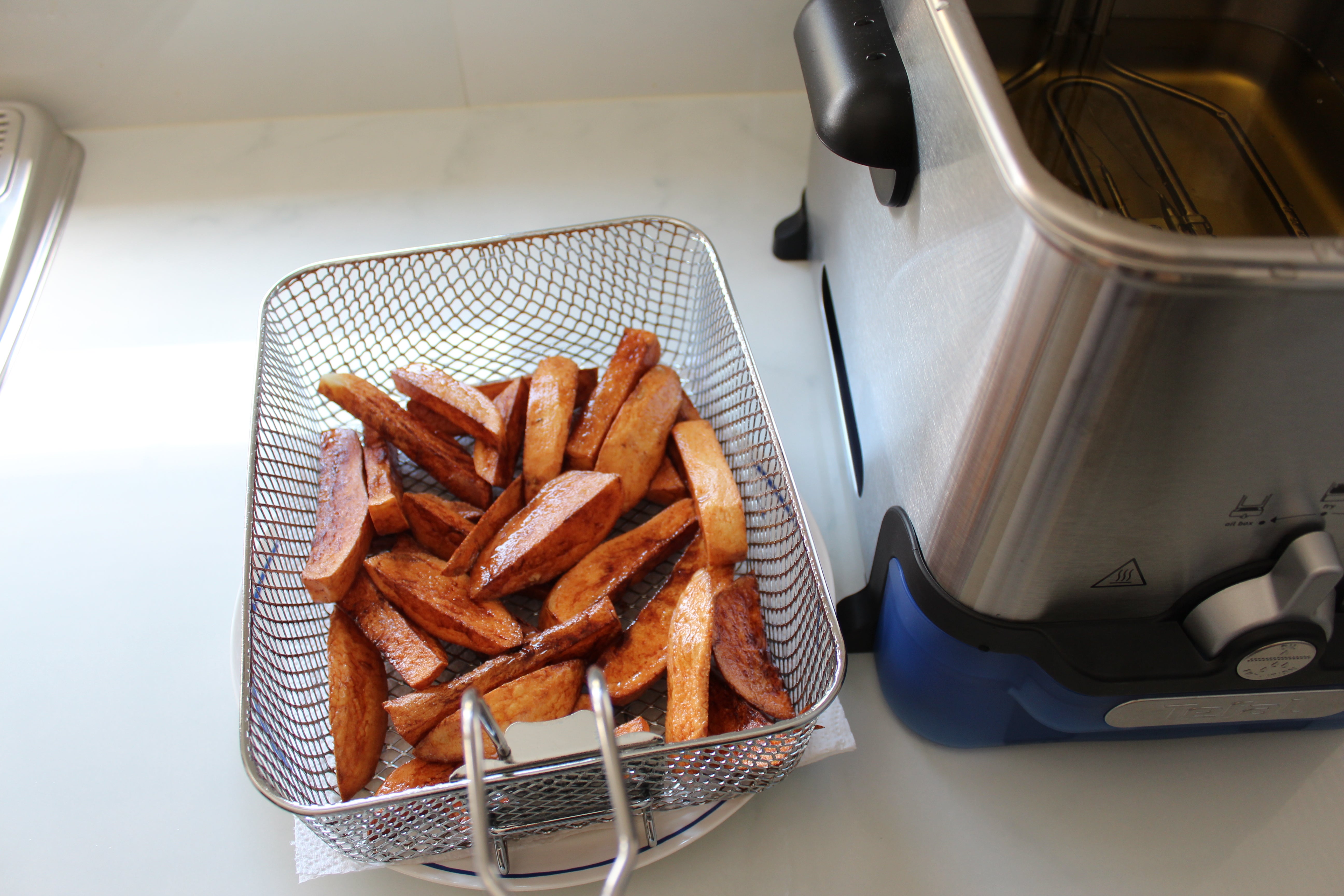 I allowed the chips to cool and put them back in for a second fry at 190C even though I felt they were sufficiently cooked. The instructions advised six minutes at this temperature. After four, I removed the chips and they were overdone. 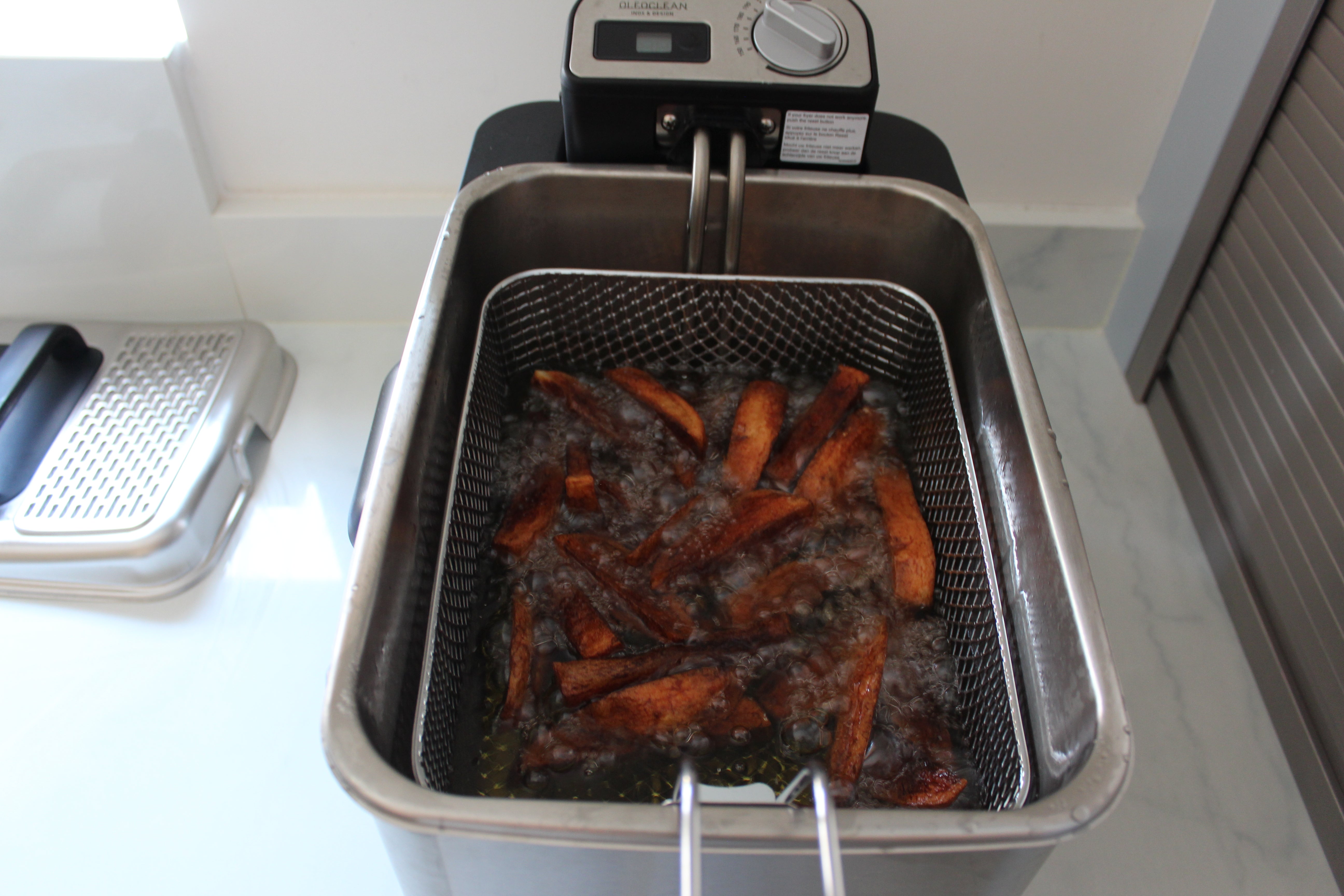 A disappointing result but one that could be solved by reducing initial cooking times or thicker chips – the actual frying was fuss-free. 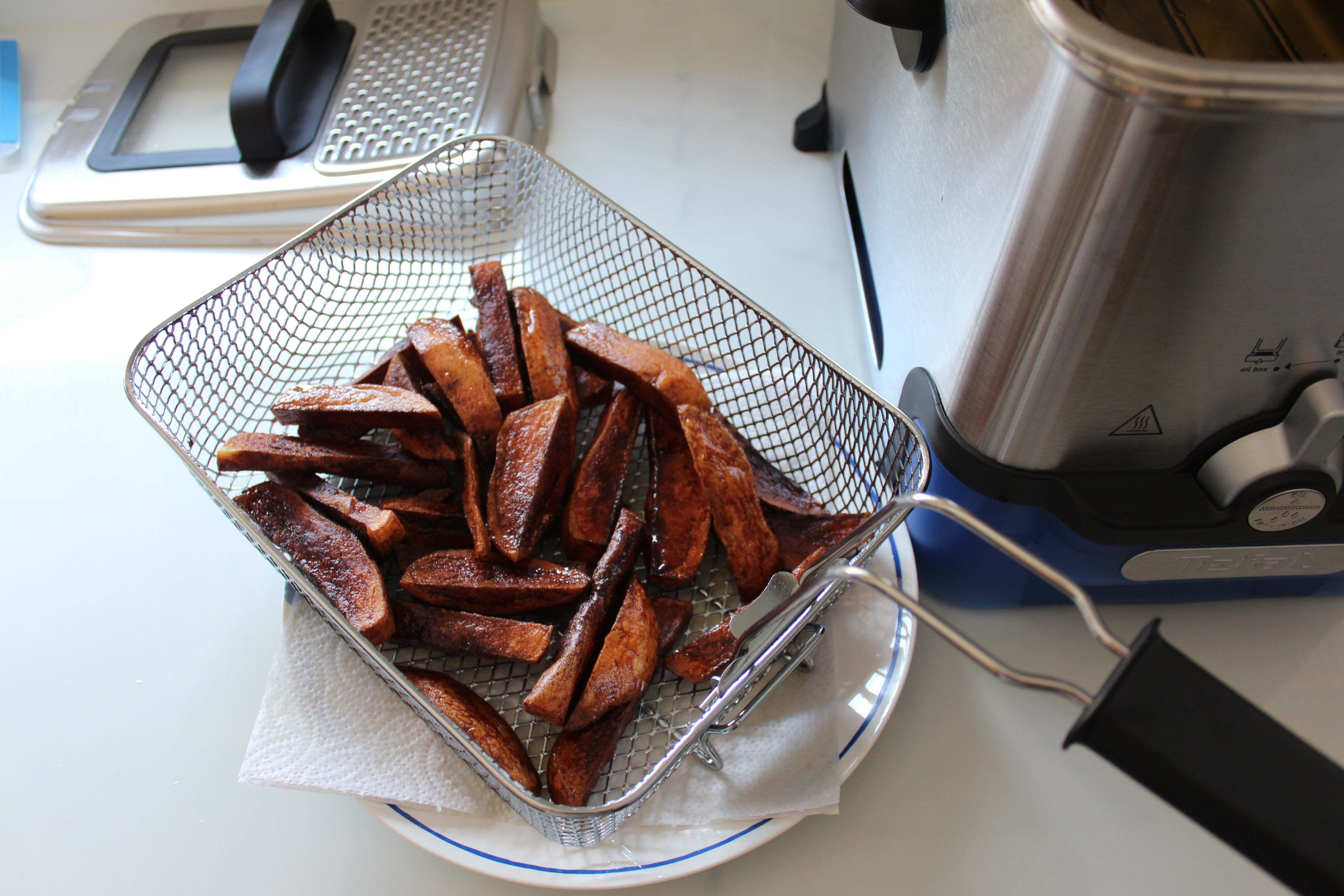 Next, I fried balls of doughnut dough without using the basket. The bowl size came in handy as there was enough depth for the doughnuts to be dropped in without hitting the bottom, space for them to turn to fry each side and they were easily removed. 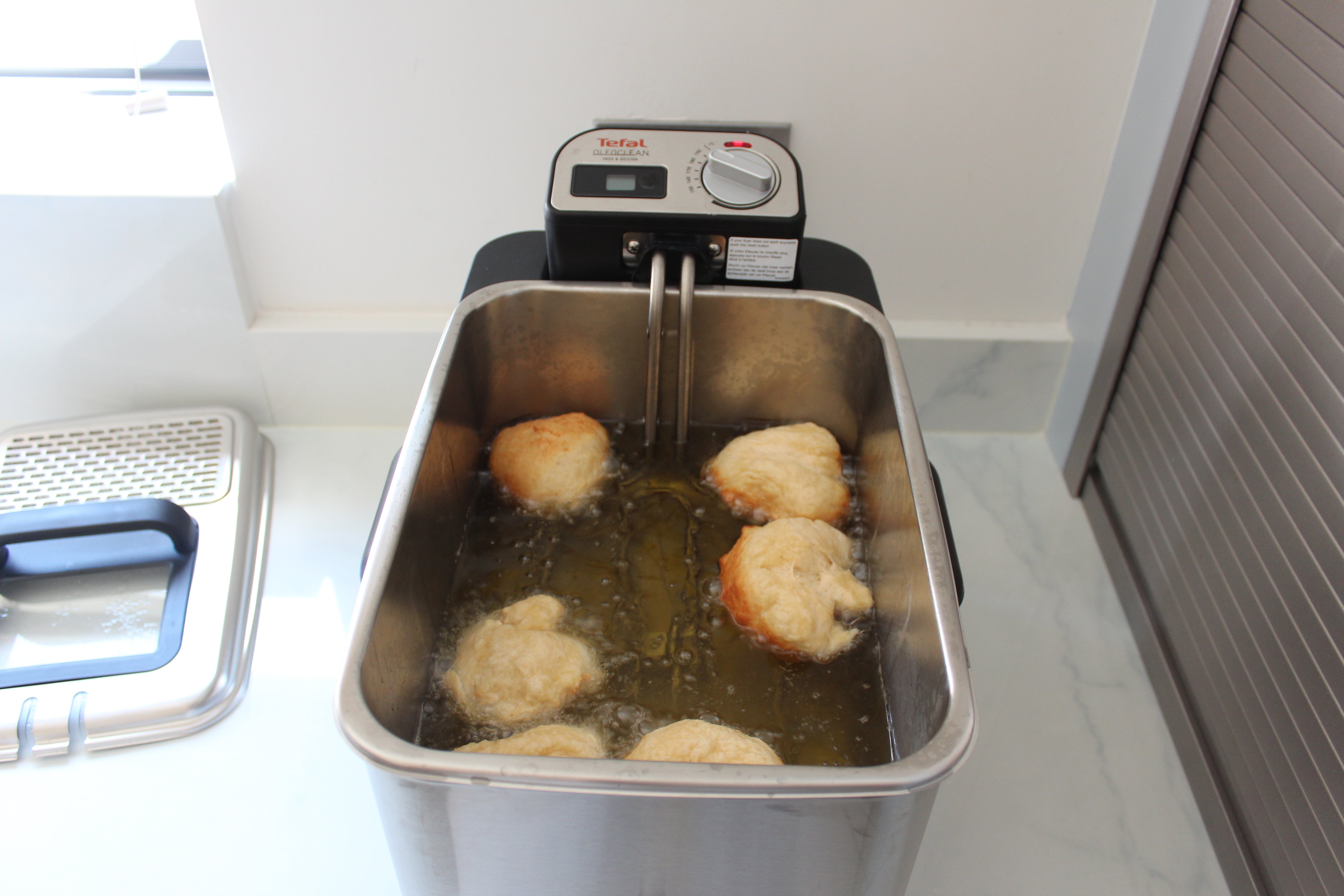 I cooked them at 180C for five minutes before scooping them out. Once drained, the doughnuts were brown on the outside, fluffy on the inside and noticeably not greasy. 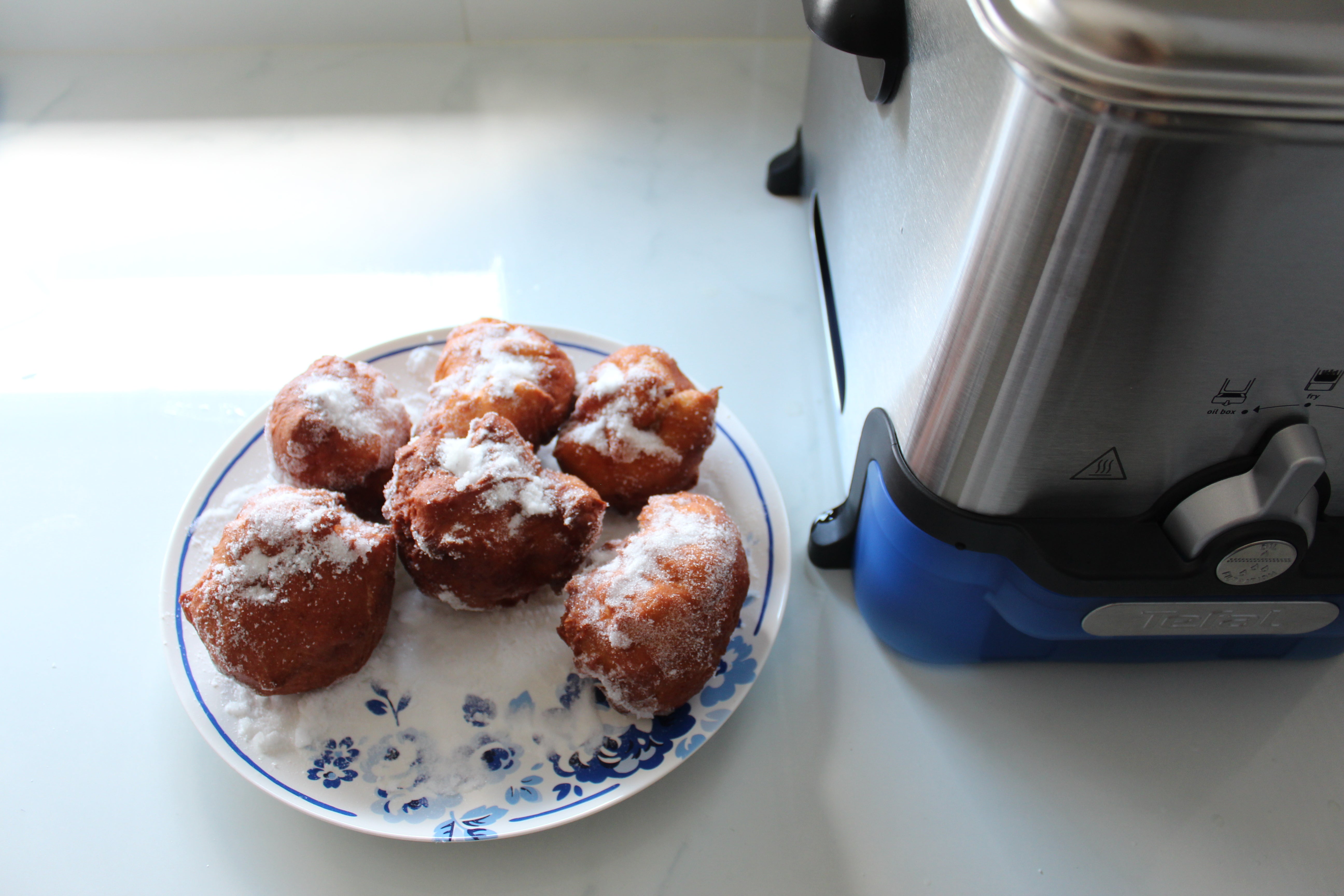 Finally, I dropped in pieces of courgette and peppers covered in tempura batter with the oil at 180C. I fried each for three or four minutes before removing. The pieces were soft inside, yet still firm, and crunchy on the outside, while also being lightly browned. 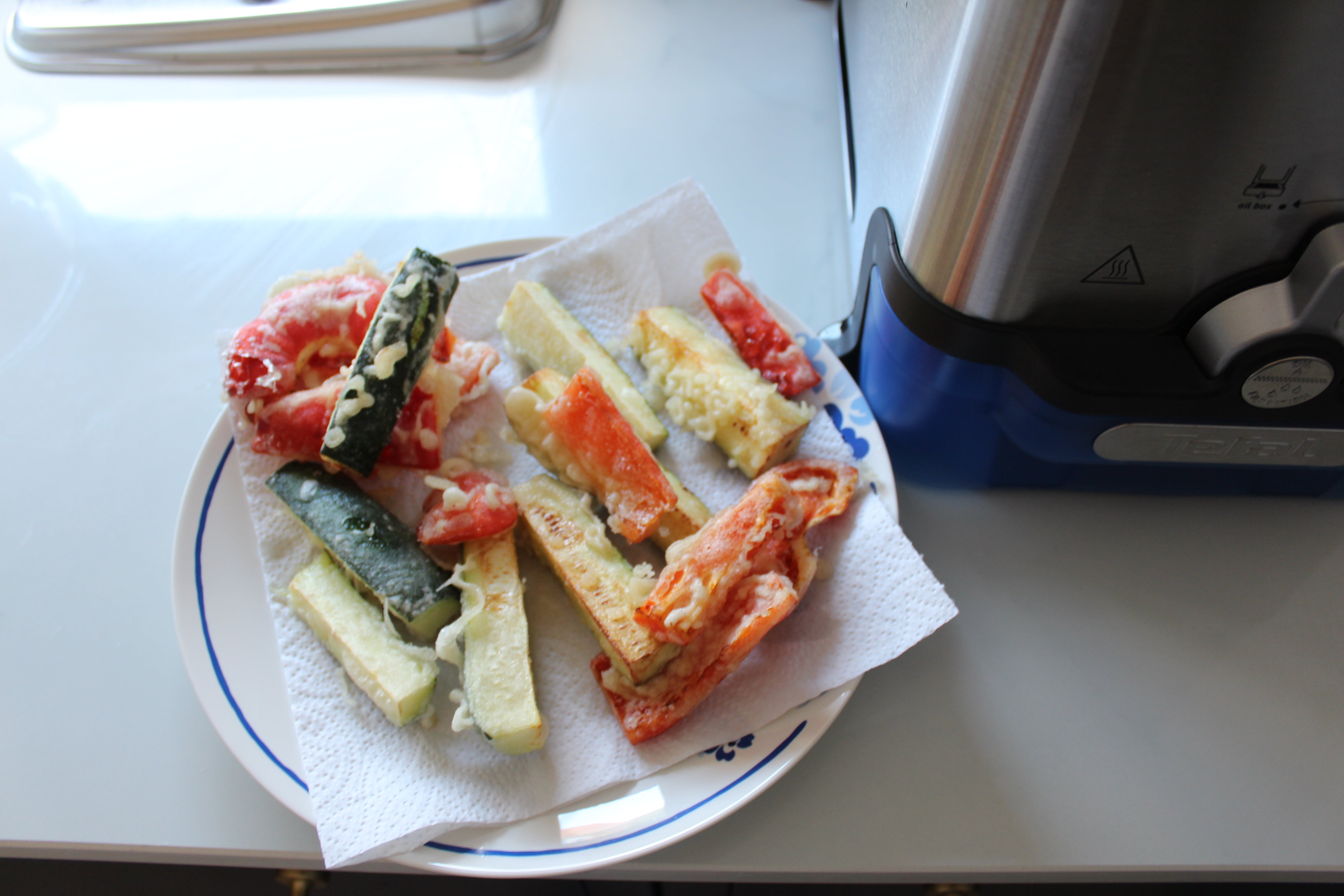 Several scraps of batter remained in the oil. Once cooled, three hours later, I turned the dial on the front of the housing to drain. 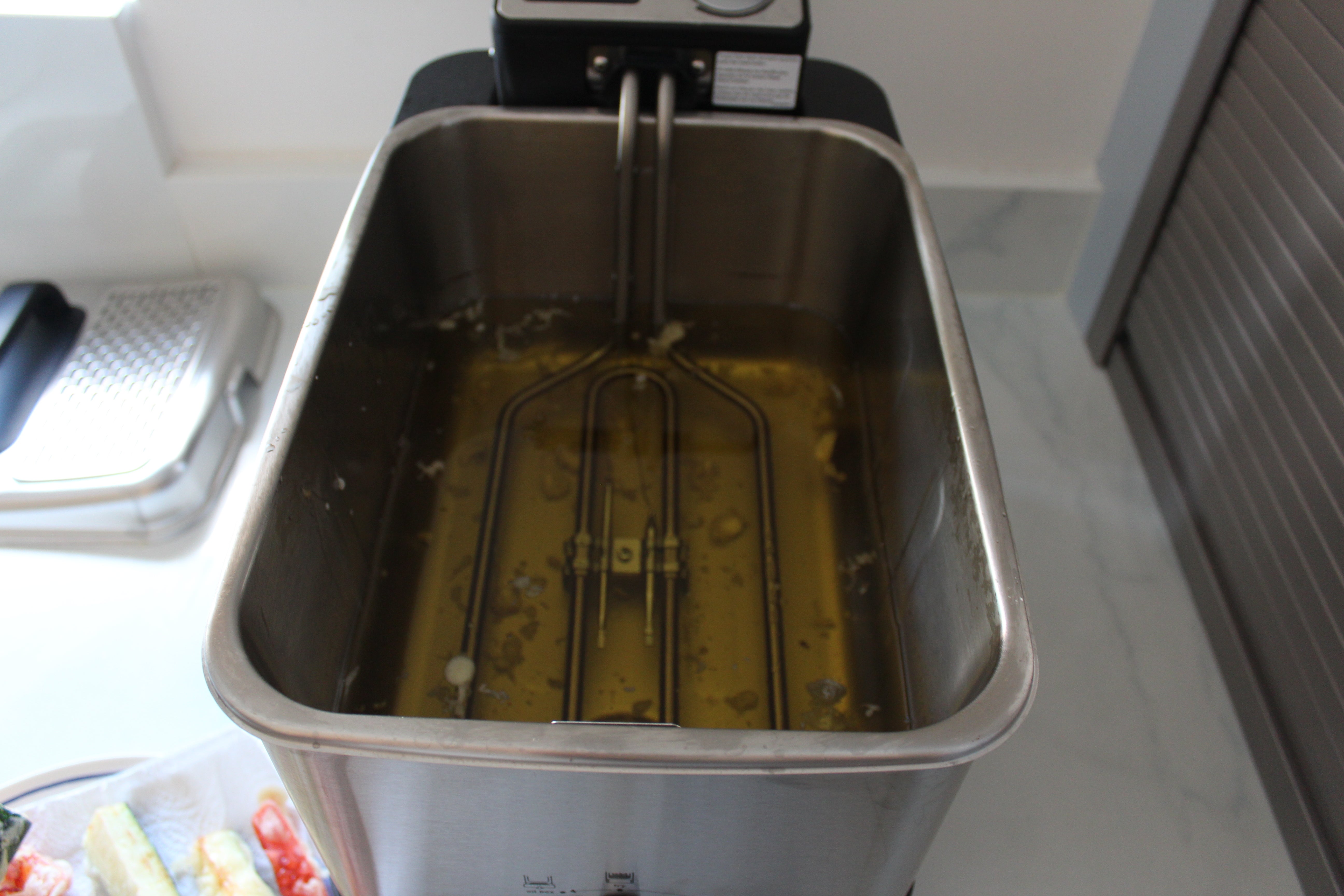 The oil filtered out in about five minutes and the drain didn’t clog. The debris was left in the bowl, which could be cleaned in the dishwasher along with all the other oily parts. The only part that needed hand washing was the element, which was simple to wipe down.

Should I buy the Tefal FR804 Oleoclean Pro?

If you’re buying a deep fat fryer on cost alone, the price tag on the OleoClean Pro might be a deal breaker. However, for those who want to use it frequently, all its clever features will make frying infinitely easier – paying for itself in time saved cleaning and being able to reuse oil when it might otherwise have been thrown away. The OleoClean Pro’s size makes it a good buy for families, anyone who likes to batch cook and those who want to reduce the fat of an authentic fish and chip supper.

Master your own deep-fried delicacies with this innovative bit of kit.