What is the Tefal MultiCook Advanced 45-in-1?

Taking the premise of a slow cooker and combining it with a host of functions and clever design, the 45-in-1 is more of a smart kitchen gadget than its unassuming exterior reveals.

It includes a micro-computerised chip that helps it to recognise different ingredients, and a micro pressure valve to help lock in flavours.

It also cooks in a patented spherical pot, which is made using a multi-layered aluminium core for better heat distribution and consistent results. This means it can tackle everything from cooking rice, porridge and stews to making yogurt, soup and desserts.

Thoughtful features aside, it’s simply one of the best-value multi-cookers around, boasting 45 manual and automatic programme combinations (17 and 28 respectively). With a price of £89.99, this works out to around £2 per programme. 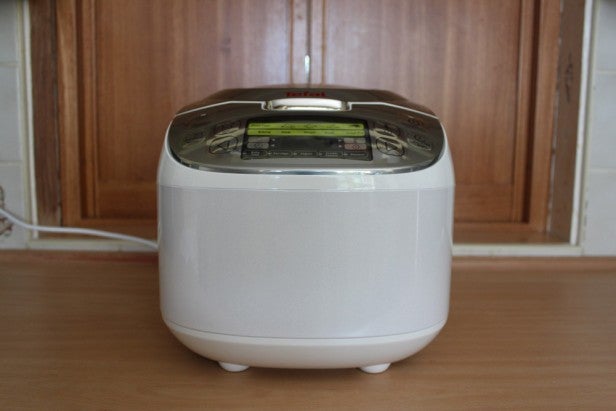 Depth-wise, the 45-in-1 is pretty big – around the size of an average breadmaker. However, it isn’t as tall, so could easily slot under wall cabinets. It’s light, too, featuring an ingenious carry handle, so moving it around is a breeze.

While the mainly white-plastic exterior is less than appealing, the top of the machine is where all the action takes place. 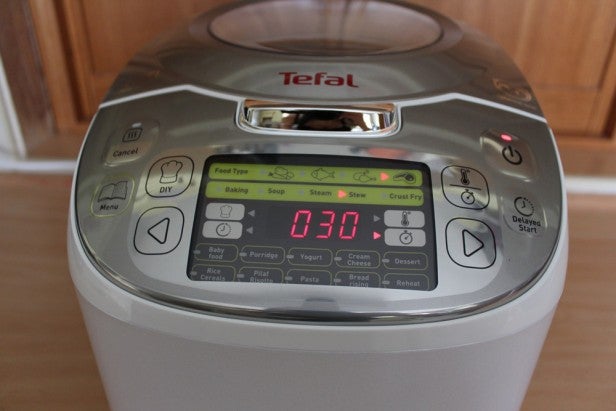 Above this is a lid release, which you press to reveal a cauldron-like cooking pot. It has clearly marked cup measurements (these correspond to the measuring cup that’s included) and a capacity of up to 20 portions.

Two spoons have also been included, which make scooping out or stirring soup and rice easier, plus there’s a steam basket that fits on top of the main cooking bowl. Handily, the inner lid can be removed for cleaning, as can the valve. The bowl, inner lid, cup and spoons are all dishwasher-safe.

Tefal MultiCook Advanced 45-in-1 – What’s it like to use?

There aren’t a huge amount of recipes included with the machine, but there’s enough to get an idea of its capabilities. We started by making One Pot Penne Bolognese, adding oil, onion, garlic and minced beef to the bowl and selecting Crust/Fry for Vegetables.

The mince and onions were well browned, but not dry or overcooked. Next, we added pasata, red wine, water and pasta to the bowl before cooking on the Stew setting for Meat for half an hour. The resulting pasta dish was delicious, with soft penne and plenty of rich sauce. 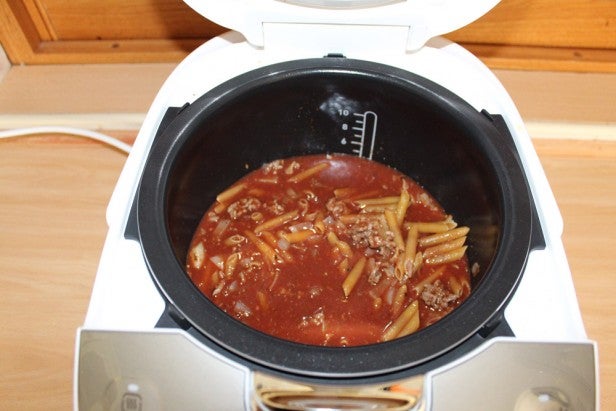 We then decided to try the Raspberry and Blueberry Sponge. Removing the bowl, we lined it with greased baking parchment and layered this with fruit. Mixing the sponge batter separately, we poured this over the fruit before replacing the bowl in the machine. Selecting the Dessert function at 140C, we baked it for 30 minutes.

At this point a skewer came out slightly damp still, so we baked for a few more minutes before removing the bowl and turning out the cake. The finished cake was golden brown with a layer of firm stewed fruit and a fluffy sponge below, although its rounded shape was a little unconventional. 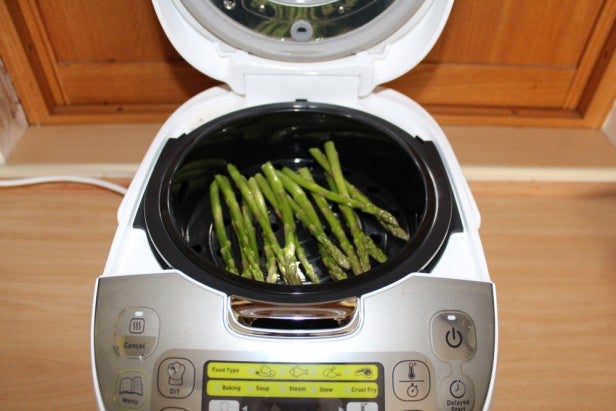 Next, we steamed some asparagus using the steaming basket with water in the bowl and the Steam programme for vegetables. This ran for 35 minutes, which could have been reduced since the steamed asparagus was a little overcooked.

Finally, we tried making risotto with Arborio rice, shallots, wine, stock and mushrooms. Adding them to the bowl in the suggested equivalent cup proportions, we selected the automatic Pilaf/Risotto function.

Since the machine adapts the time to the ingredients in the bowl, it didn’t display the cooking duration. After stirring a few times with the rice spoon, it took around 45 minutes.

While the rice was well cooked, the grains were fluffy rather than creamy and there was little in the way of sauce. At the bottom of the bowl, some of the rice had crisped and browned – ideal for paella, but not risotto.

Clean-up was simple, however, since all the parts are dishwasher-safe. Washing the bowl and accessories by hand was also easy. 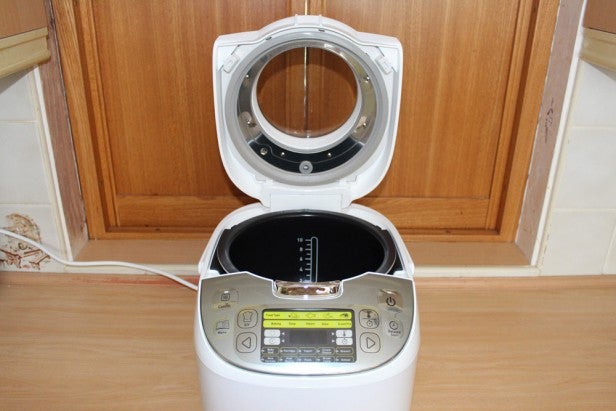 Should I buy the Tefal MultiCook Advanced 45-in-1?

Slow-cooking fans and time-poor households alike will find many reasons to love the 45-in-1. Reheat, Delay Start and Keep Warm functions mean it’s everything a slow cooker should be and more. In addition, it includes other programmes that a keen cook will be happy to experiment with – such as yogurt.

While one or two functions involve a little trial-and-error to get the desired results, and a time estimate on the rice programme would have been welcome, for the most part this machine performed very well.

A great-value buy with plenty of features. If you’re looking to make more of your meal times then the Tefal MultiCook Advanced 45-in-1 multi-cooker is a smart upgrade.