What is the Weight Watchers 3 Tier Steamer?

Steaming remains a popular way to cook fish, vegetables, poultry and meat but if you’re not ready to commit to a steam oven, this affordable tabletop steamer is an easy way to try it. Compromising three tiers, so you can make a whole meal in one go, its gentle steam cooking will help to lock in vitamins and minerals while requiring no additional oil. Handy features, such as an auto shut-off when it’s finished cooking or the water runs out, and a bowl for steaming rice, make it a good-value buy if you’re looking for small ways to make a big change to your lifestyle. 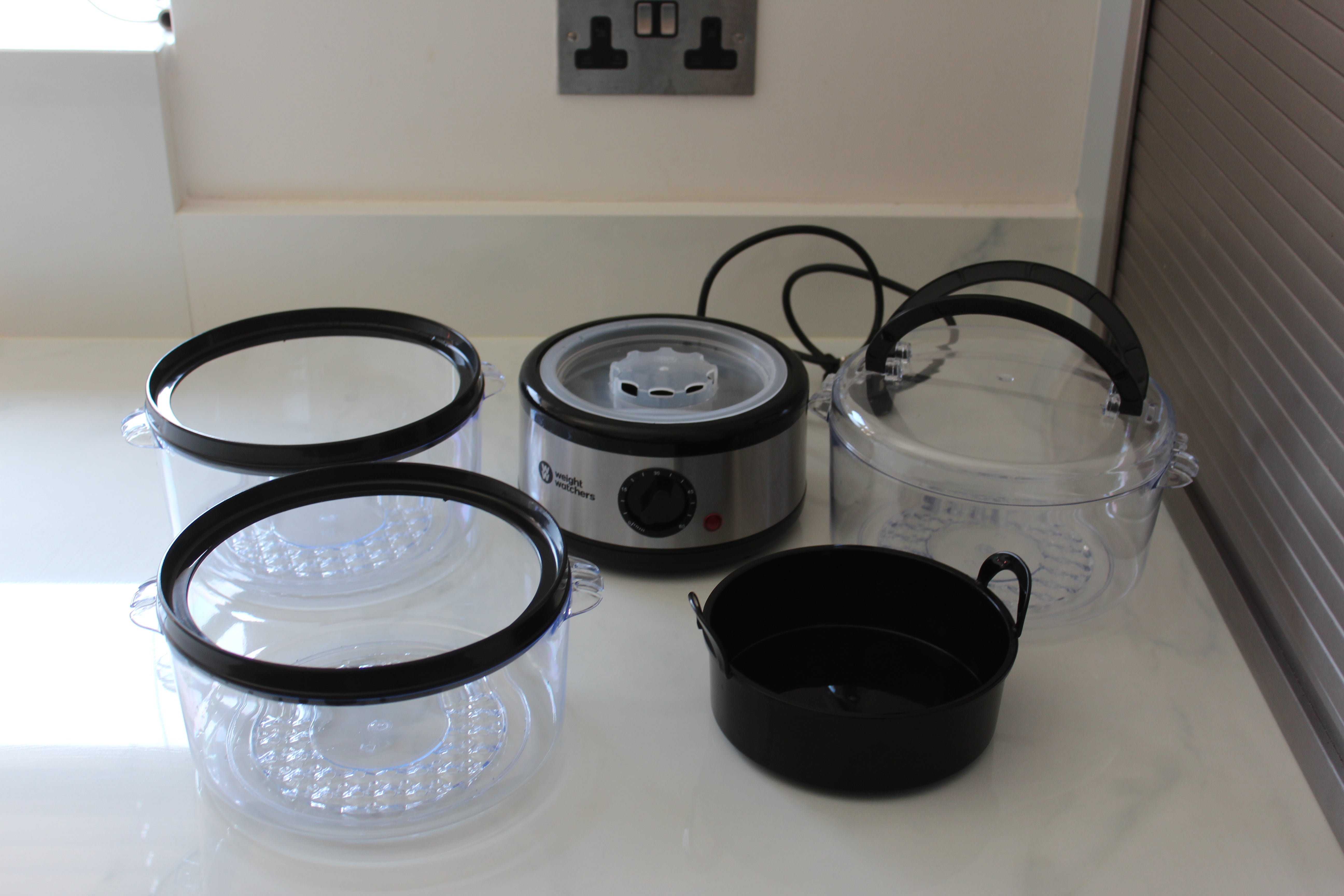 The 3 Tier Steamer comprises three clear baskets that stack on top of each other with two plastic mounts to separate them and a vented lid with handles that sits on top. It can function as one or two tiers if you’re preparing less food. Each plastic basket has a pair of small fork-like handles and holes in the base to let the steam through but the sides feel quite flimsy. There’s also a solid black bowl that sits in the top tier that’s used to simmer rice. 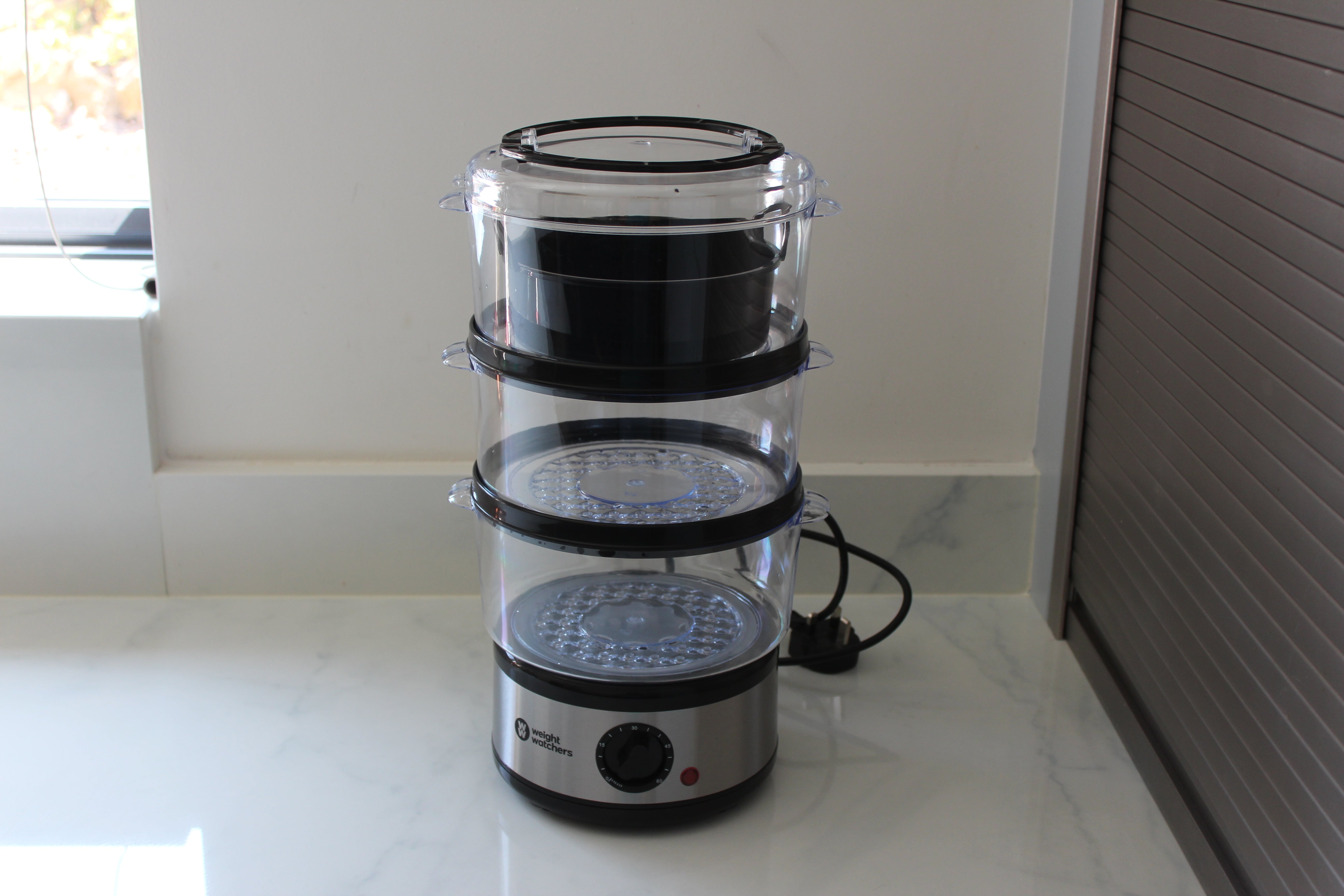 The base contains a 500ml reservoir that’s filled with boiling water when you’re ready to cook. A vented plastic lid sits over the reservoir, though this part isn’t mentioned in the instructions. Turning a manual dial on the base switches the steamer on and allows you to set a cooking time from a few minutes to an hour. The first five minutes are marked individually, while the others are shown in increments of five – basic but given that steaming is gentle, overcooking is less of an issue. 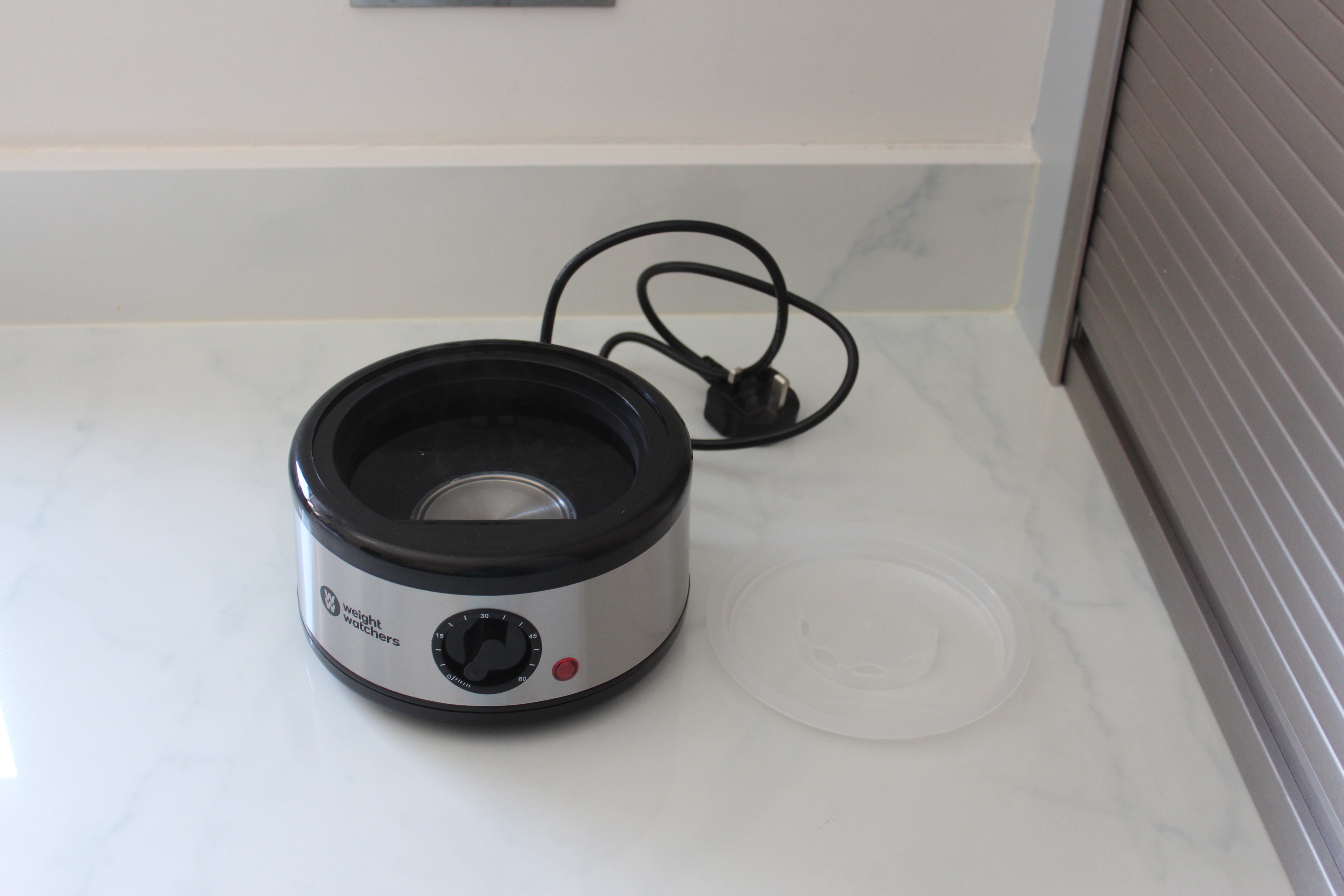 Weight Watchers 3 Tier Steamer – What’s it like to use?

There might only be four Weight Watchers pointed recipes provided with the steamer – none of which are vegetarian – but there is a table of cooking times for different foods to use as a guide. However, even with this information, the manual advises that cooking times might need to be extended for greater quantities of food or distance away from the base, so some prior experience of steaming would be useful. 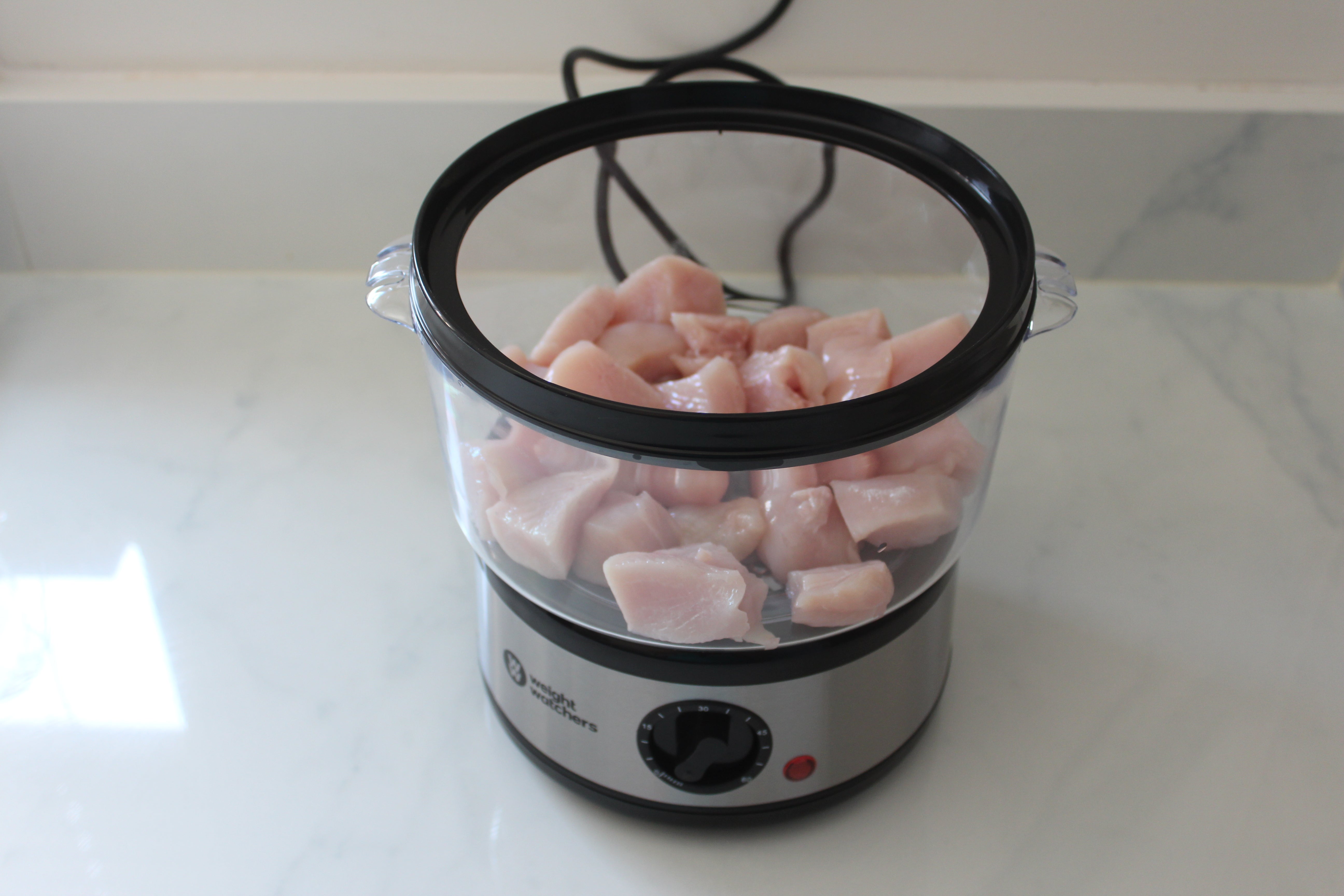 I decided to use all three baskets to steam a variety of food simultaneously. In the bottom basket, I placed cubes of raw chicken, above, similarly sized chunks of potato, and on top, dry rice covered with water and placed in the dedicated bowl. The approx. cooking times for these foods were 20-30 minutes for the chicken, 20 minutes for the potato and 25-30 minutes for the rice. I filled the reservoir to the max fill mark and set the dial to cook for 30 minutes. 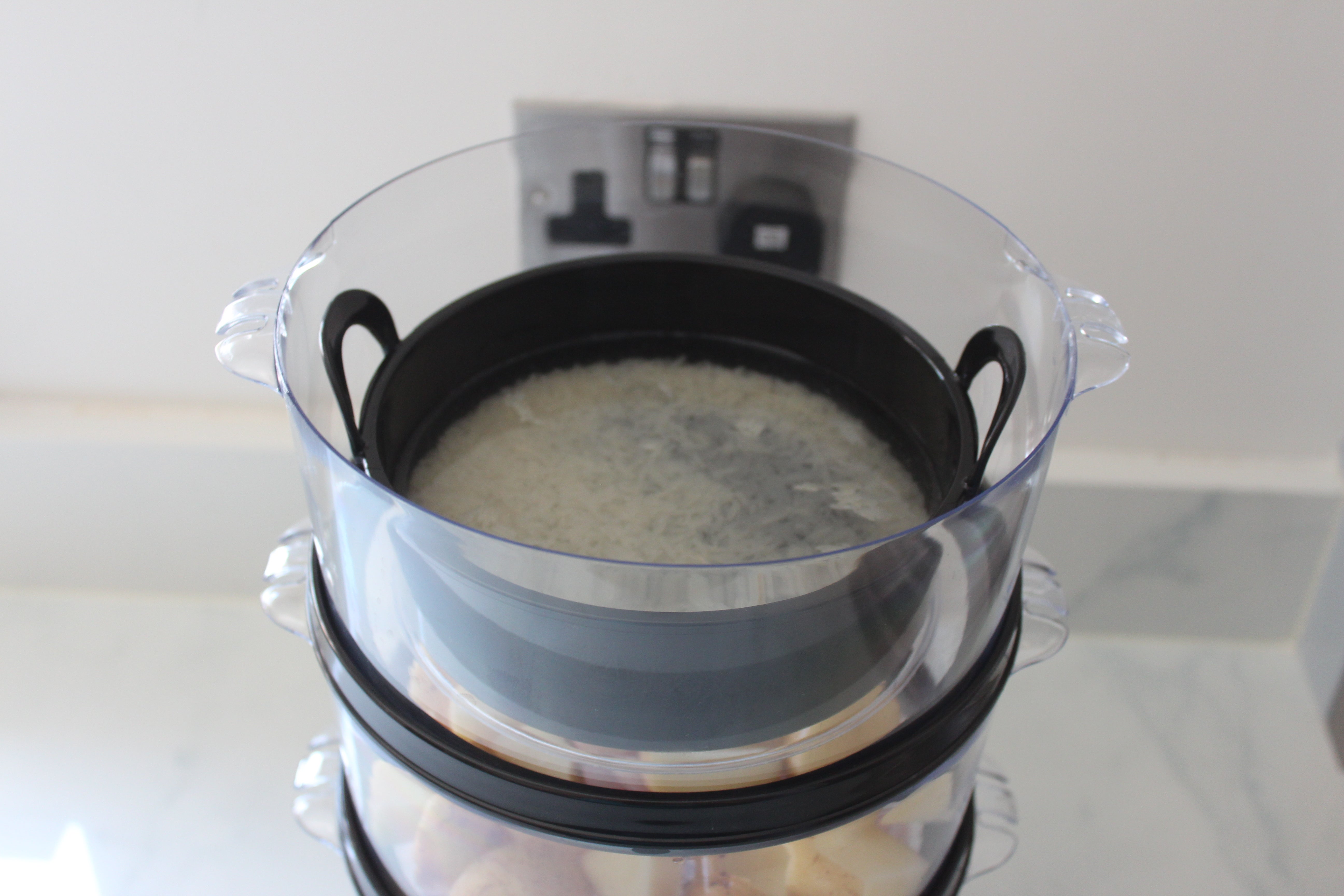 About 10 minutes into cooking, the lower basket started to fill with water that had bubbled up from the reservoir and wasn’t draining away. Instead, it began to leak onto the worktop, so I had to wrap kitchen towel around the base throughout the remainder of the cooking time. 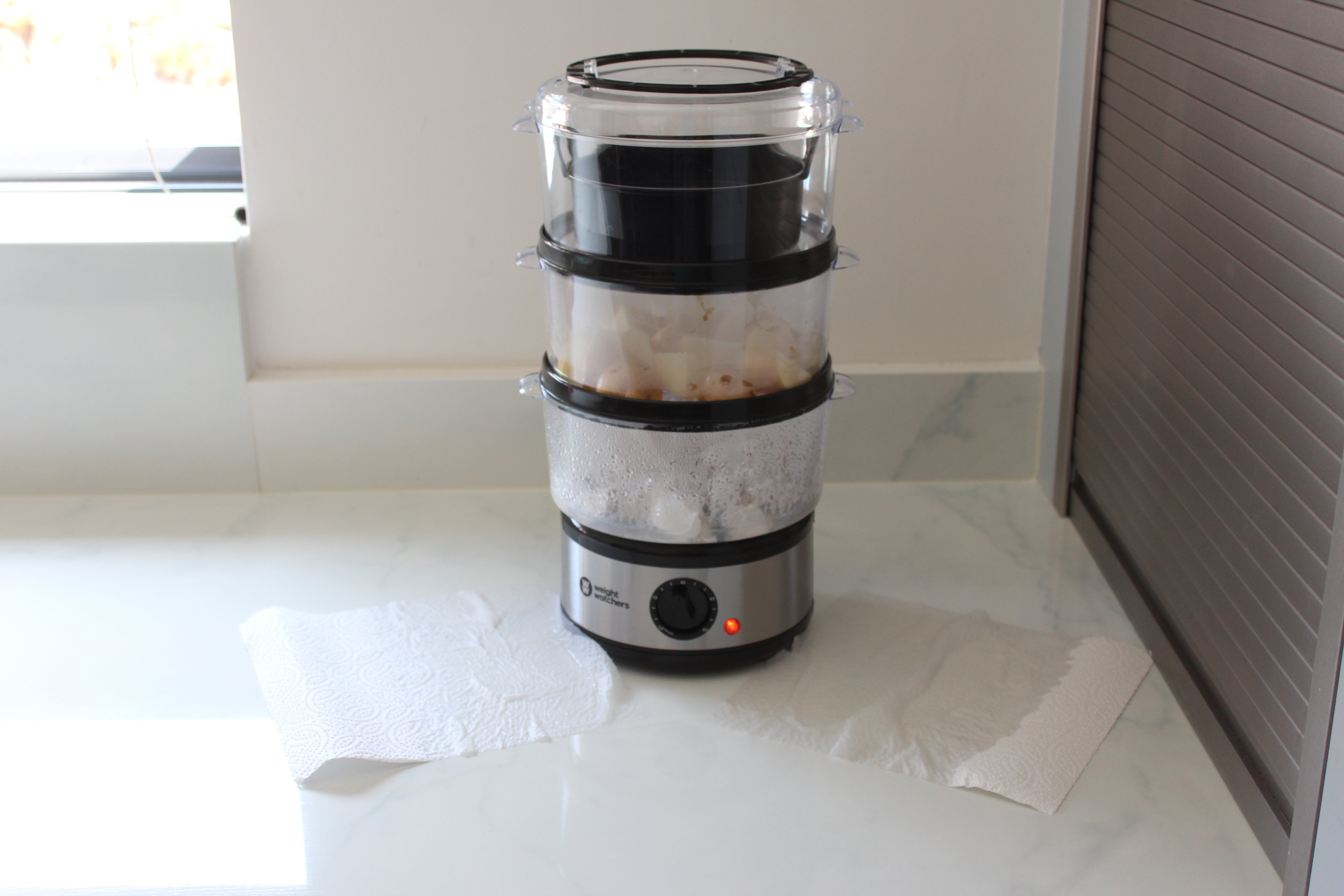 Around 20 minutes in, most of the excess water stopped leaking onto the worktop, with only a few drips escaping. However, the water remained in the lower basket as the chicken cooked, poaching it rather than steaming. 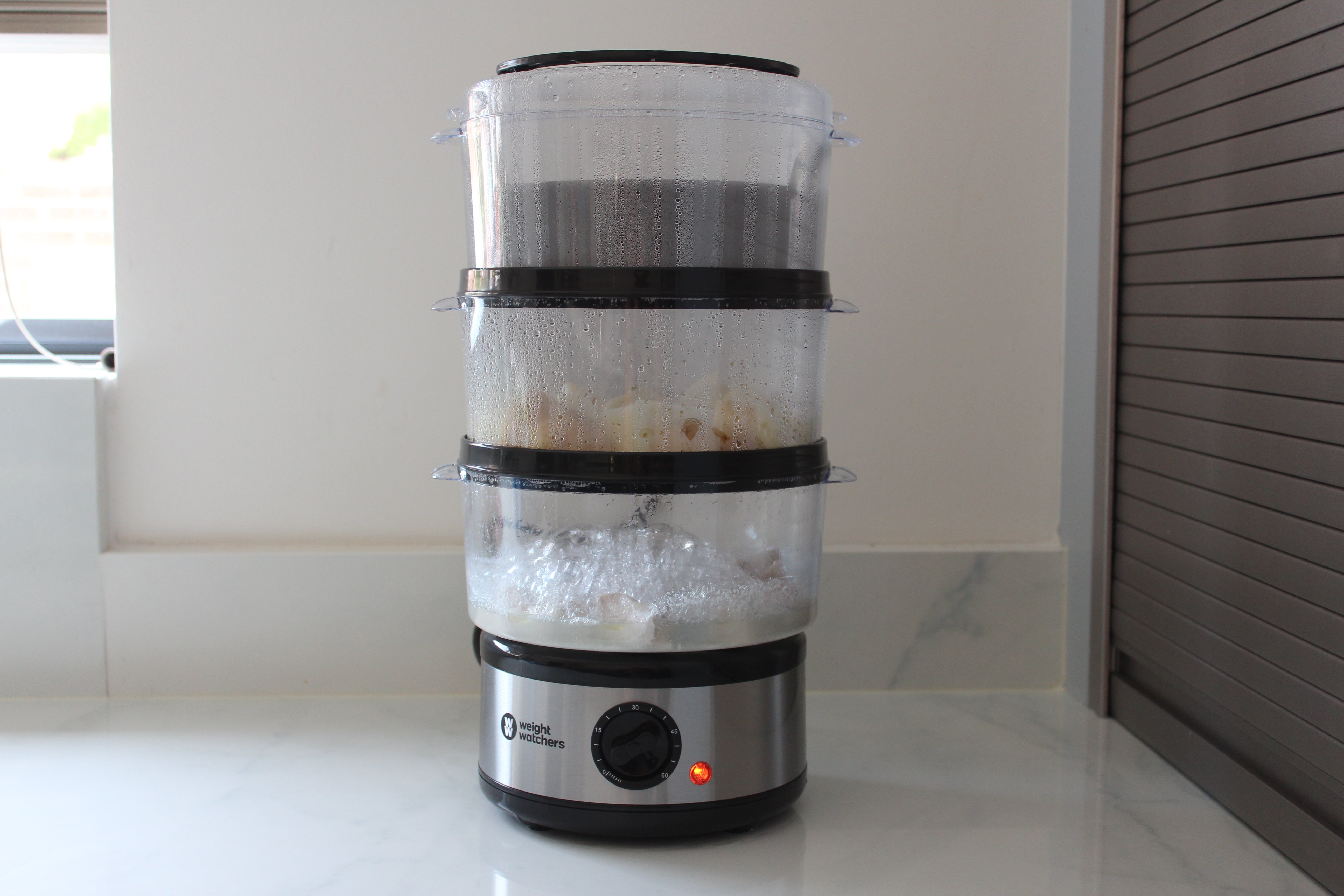 Once the time had elapsed, there wasn’t an audible alert to let me know cooking had finished but it did stop by itself. Removing the food from the baskets was simple. 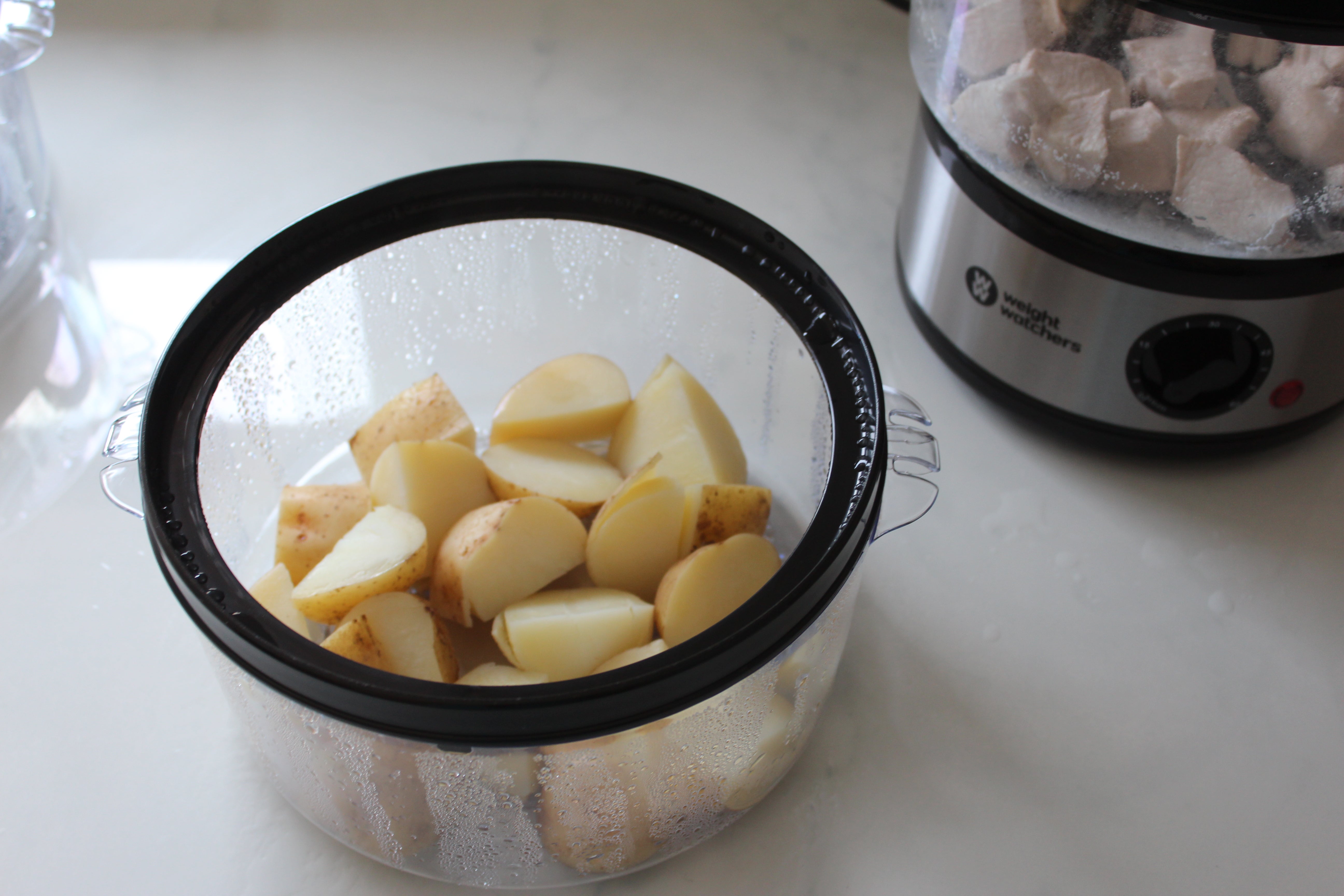 The chicken was overcooked and dry, but the potatoes were perfect – cooked through, slightly firm but not hard or mushy. The rice was also well cooked and soft. There was water left in the reservoir that was milky with chicken fat, so it had to be cleaned before the next use. 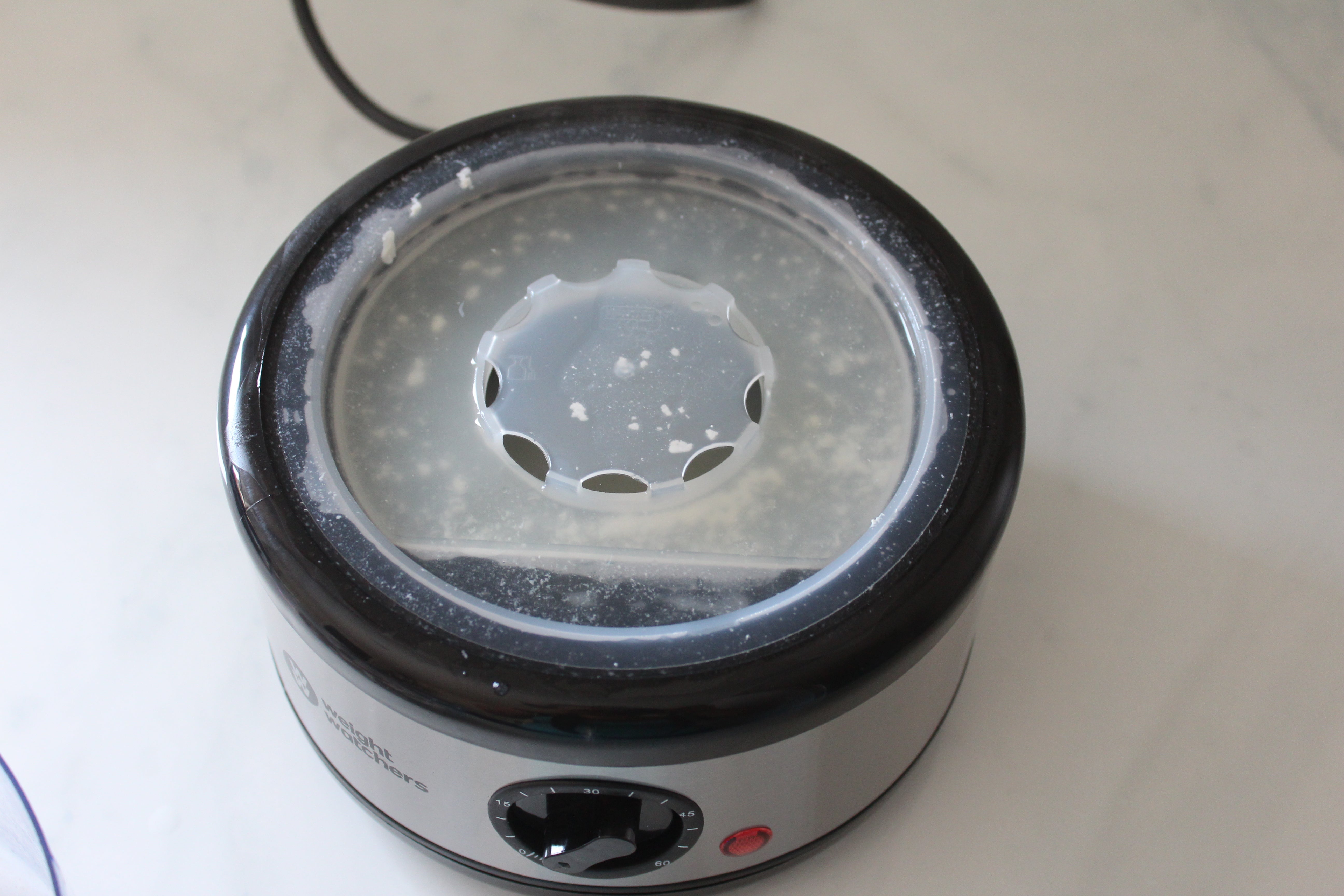 I refilled the reservoir halfway. Using only two baskets, I placed broccoli florets in the lower basket and sliced mushrooms in the one above. 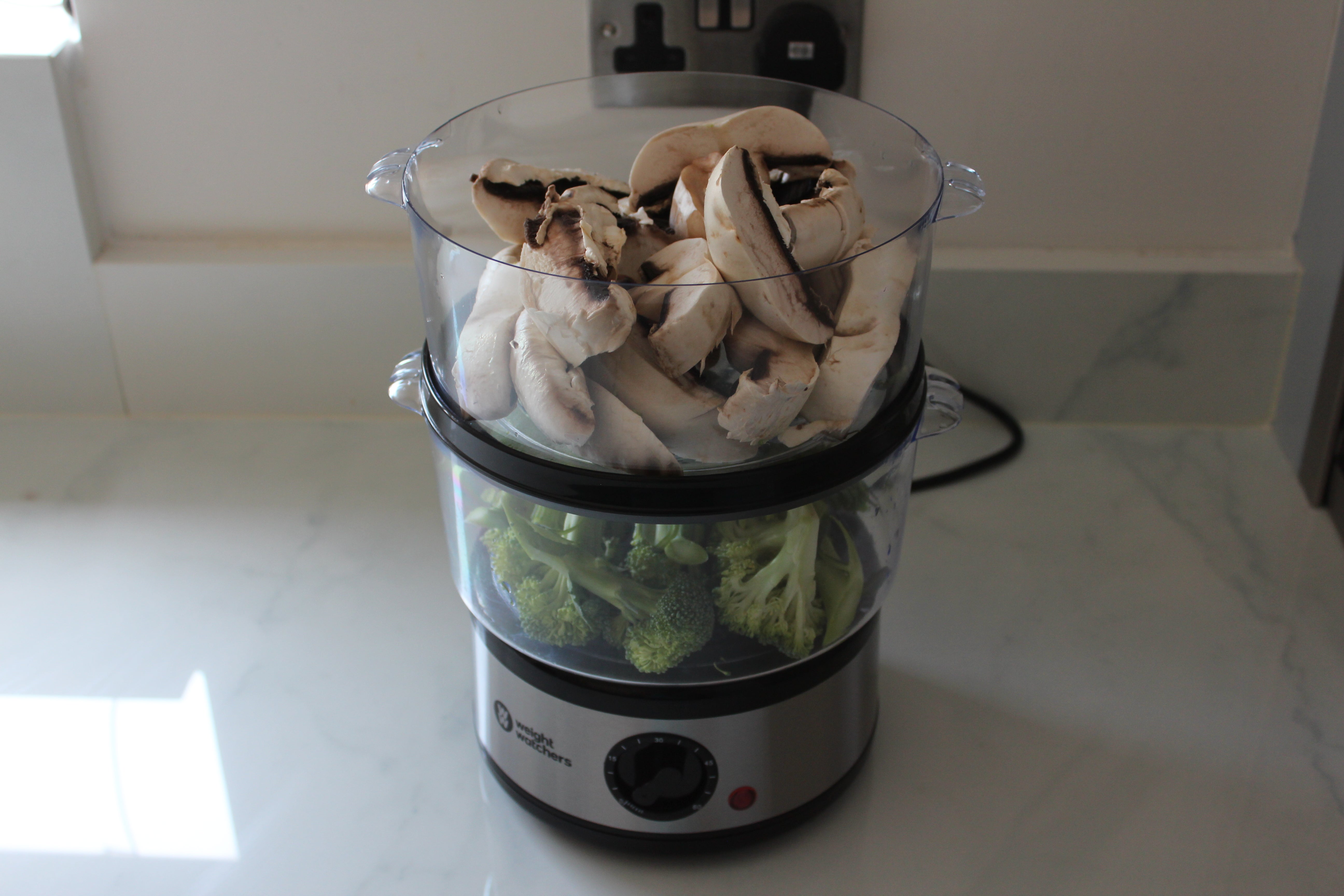 The advised cooking times were 15 minutes and 10-13 minutes respectively. I set the timer for 15 minutes. Towards the end of the time, I noticed the steamer had started leaking liquid again from multiple points, even though the reservoir was only half full at the start of cooking. 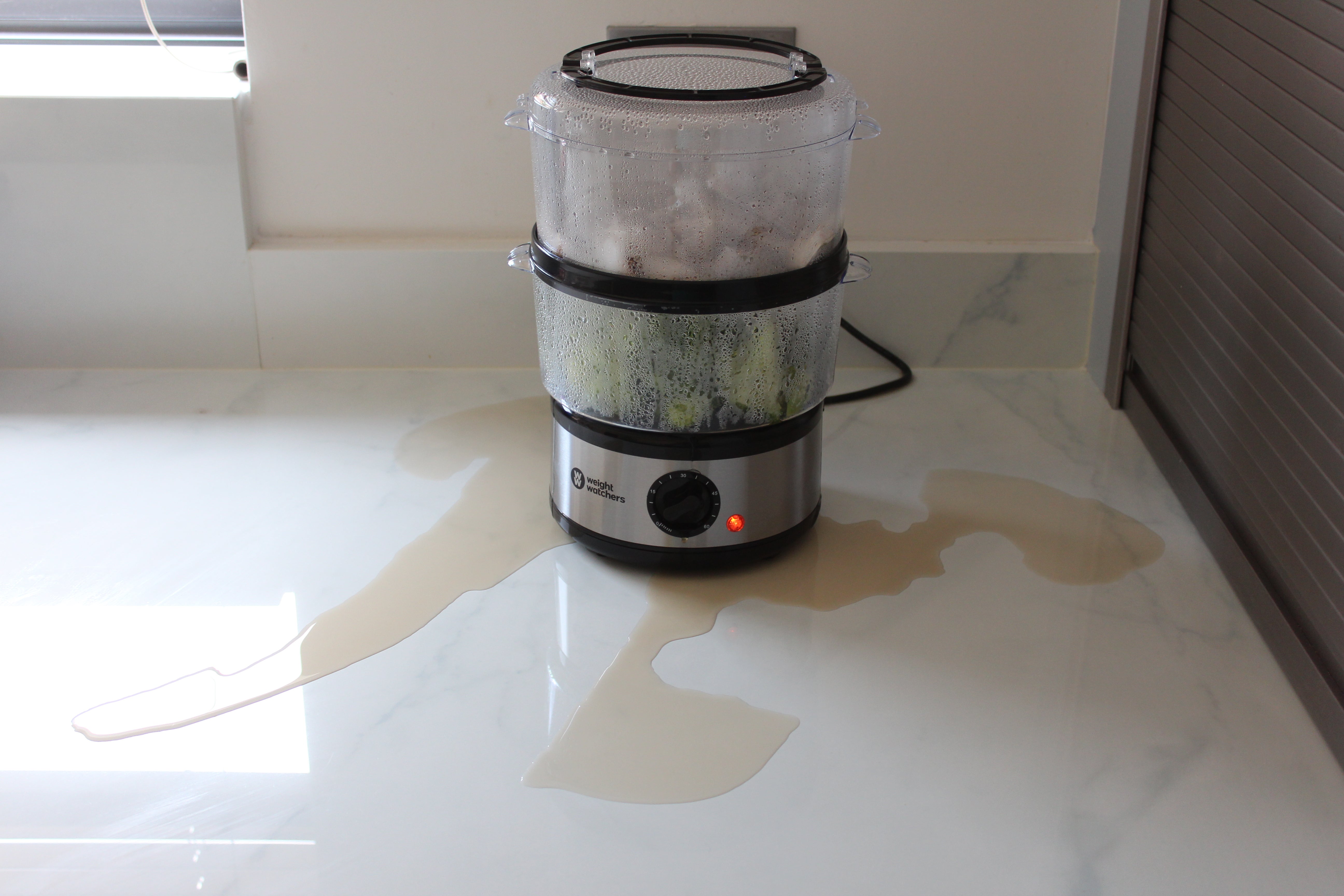 The vegetables, however, were both thoroughly cooked, tender yet firm and full of flavour. 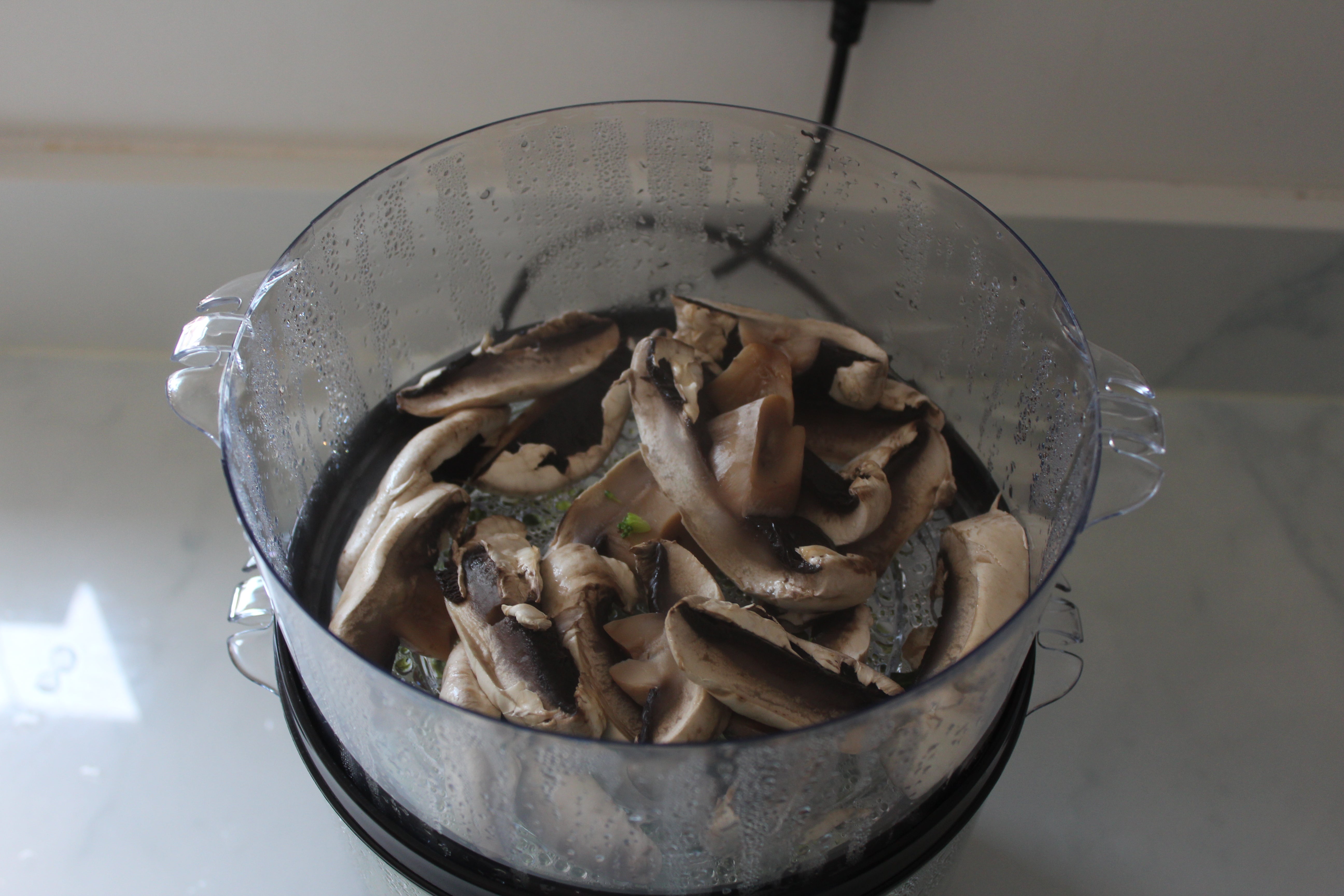 It wasn’t clear if the parts were dishwasher-safe, so assuming they weren’t, I washed all by hand. As the food had only been steamed, most food debris was rinsed away easily. However, the base’s reservoir was more difficult to clean because of the leakage.

Should I buy the Weight Watchers 3 Tier Steamer?

There’s a lot to like about this simple steamer – it has a low price, is easy to assemble, store and clean and cooks as well as more expensive models. It also has enough capacity to steam a family meal. Unfortunately, the water spillage and soaked chicken that I encountered heavily counted against this product in my tests. Having a handy couple of towels around will help with the problem and, at this price, the 3 Tier Steamer does a good job at a low price.

Problem puddles aside, this easy steamer is great for low-fat eating.

Zuhaib Abid - May 31, 2021
Whether it's served at diners or breakrooms or on kitchen counters, drip coffee remains one of the most popular types of coffee. Homemade versions...